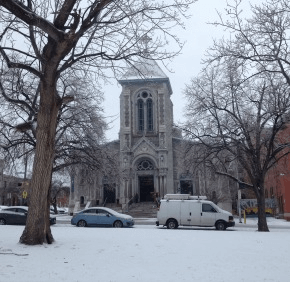 A winter storm closed public school systems across the 10 jurisdictions that comprise the Archdiocese of Baltimore March 14, likewise giving the day off to students of Catholic schools, which follow the closure decisions of their public counterparts.

From Garrett County to Harford County, snow, ice or a combination created hazardous travel conditions and activated the use of that phrase favored by school principals, superintendents and decision-makers across the region: “inclement weather.”

In Baltimore City, precipitation began around 8:30 p.m. on March 13, and commuters awoke to find dense layers of slush, snow and ice covering roads and sidewalks and encasing automobiles.

Archdiocesan headquarters remained closed for the day, as did other city institutions, such as the Enoch Pratt Free Library and circuit and district courts.

Outreach programs such as Catholic Charities of Baltimore’s Our Daily Bread Employment Center, which has served daily meals for those in need for 36 years, continued their services.

The storm was the first major weather event to hit the archdiocese during the winter of 2016-17, which officially gives way to spring on March 20.

Church has presence at convergence of interactive, film, music industries

The Least of These: Serving students with special needs, joyfully