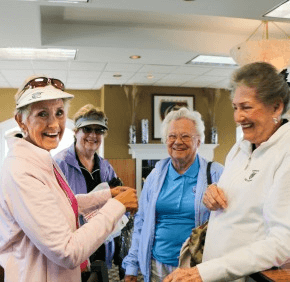 By Paul McMullen
pmcmullen@CatholicReview.org
Twitter: @ReviewMcMullen
Charles Linn was eager to share the game of golf with his wife, Jo Ann.
“He said the ‘best gift you can give me is to take lessons, so we can play together,’ “ she said. “That was in 1994 … I thank him every day for that.”
After he died New Year’s Day in 2012, that gift kept on giving, in the form of a group of women with whom she continues to tee it up.
“Three weeks and three days after he was diagnosed with cancer, he was gone,” Linn said. “From the time we found out he was sick, my golf friends were there for me. They’re still there for me.”
This time of year, that would be at Greystone Golf Course in White Hall, where Tuesday mornings are reserved for the Greystone Ladies League. Of the 30 or so women playing at the public course in northern Baltimore County, half are Catholic. Some of the same women reserve two times on Monday, when six of the eight playing are Catholic.
Linn, a parishioner of St. Ignatius, Hickory, had known her husband since she was in the second grade at St. Dominic School in Hamilton, “and he was in the fourth.” He came from a Baltimore family dedicated to the church, as his uncles included the late Monsignor Francis Joseph Linn and Sulpician Father John F. Linn.
Most members of the Greystone Ladies League and the Monday group came of age before Title IX federally mandated equal opportunity in athletics for women in 1972.
Pat Harig Koermer merited nine varsity letters in badminton, basketball and volleyball at the Institute of Notre Dame, but earned a degree in physical education from what is now Towson University when collegiate women were relegated to intramurals. Like Linn, she is a widow, who was drawn to the game by her husband.
“I’ve always had a love of the game and sports in general,” said Koermer, a parishioner of St. Margaret in Bel Air. “I had played in college, but hadn’t touched a club in 20 years when he said ‘let’s go back to playing golf.’ I had been caring for my mother. After she passed, I started playing four times a week.”
Like Linn, Koermer has grown attached to her golf circles.
“These are all good people,” Koermer said. “We laugh a lot, but nobody’s catty. We’re all there to support each other.”
Rained out April 20, the Monday group lingered in the Greystone clubhouse and played dominoes. Anne Mundth is a fellow parishioner of Koermer’s at St. Margaret, and Rose Wierzbowski worships with Linn at St. Ignatius. Sally Bergen is a member of St. Joseph, Cockeysville. Mary Claire Mari and Eunice Jaeger round out the group. Three times a year, they plan a golf getaway to Western Maryland, Pennsylvania or the Eastern Shore.
As the golf industry struggles to bring younger players into the game, it continues to rely on the senior set. In 2012, the National Golf Foundation estimated that 37 percent of players are 60 and over, with another 24 percent in the 50-59 age group.
The mother of two, grandmother of five and great-grandmother of one, Linn turns 73 April 30. She winters in Florida, makes regular visits to the gym, and goes nowhere without reminders of her husband. Dangling from chains around her neck are the Medal of the Immaculate Conception he received for his first Communion, circa 1947, and his wedding band.
“He never took it off,” she said, “he used to say, ‘You’ll have to cut it off.’ When he died, a nurse offered to take it off for me, but I said, ‘I put it on him, I’ll take it off.’ ”