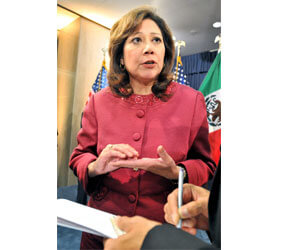 WASHINGTON – The office of Secretary of Labor Hilda L. Solis includes images of Our Lady of Guadalupe, a glass crucifix and a sculpture of Mary and Jesus. Her Catholic faith, she said, “is a part of my life. My faith is what motivates me.”

The lessons her faith teaches about hope, about helping others, about seeking higher things is something woven into the fabric of her daily life, she said. “I do it in a quiet way,” she said.

During an Aug. 30 telephone interview, Solis spoke about the lessons she learned from her parents, devout Catholics and hard-working immigrants who raised seven children in the Los Angeles area and attended St. Louis of France Parish in La Puente.

Her father, who is now 87, was born in Arizona, later moved with his family back to Mexico, and eventually immigrated to the United States. As he raised his family in California, he worked in many different jobs, including at factories, and he was a union organizer for the Teamsters, helping immigrant workers at a battery recycling plant.

Her mother, now 85, was born in Nicaragua. She raised her five oldest children as a homemaker, and later helped support the family by working the “graveyard shift” with other immigrants at a toy factory. As a member of the United Rubber Workers, she had a pension and health care benefits, and kept working “longer than necessary so our younger sisters would have medical coverage,” the Labor secretary said.

Solis has a picture of Cesar Chavez in her office, and she said the life of the legendary labor leader “reminds me a lot of my family.” As a young member of the California State Assembly, Solis attended the funeral Mass for Cesar Chavez in 1993, and she said it was inspiring to see how many lives he had touched in his work as an advocate for migrant farmworkers.

The Labor secretary’s respect for migrant workers was reflected one week before Labor Day, when she hosted a ceremony to sign joint declarations with the ambassadors of the Dominican Republic, Costa Rica and El Salvador to protect the labor rights of migrant workers from those countries who are employed in the United States.

Today’s immigrant workers from Latin America, like earlier immigrants from Europe, have come to the United States seeking the American dream, a better life for themselves and a better future for their children, she said, adding that she admires them for their “strength, sacrifice and forbearance.”

Another role model for Solis is Frances Perkins, who served as the U.S. secretary of Labor from 1933 to 1945 during the administration of President Franklin Delano Roosevelt, and was the first woman to serve in the U.S. Cabinet. Perkins played a key role in the establishment of the Social Security Act, and the first minimum wage and overtime laws.

Solis said she sometimes prays at St. Monica and St. James Episcopal Church in her Capitol Hill neighborhood, a church that Perkins once attended. It is said that the New Deal stateswoman crafted some legislation on health and safety standards in that church’s rectory.

As a congresswoman from California, Solis attended St. Joseph Parish on Capitol Hill, and she sometimes attends Masses at the Cathedral of St. Matthew the Apostle in downtown Washington.

In 2009, Hilda Solis was confirmed as the secretary of Labor, after serving in Congress for the previous eight years. In 2000, she became the first woman to receive the John F. Kennedy Profile in Courage Award, for her work on environmental justice issues. Earlier in the California State Senate, she led the passage of a law increasing the minimum wage for workers, and also authored laws aimed at combating domestic violence.

In her work at Labor, Solis said she has been inspired by the dignity and sacrifice she has witnessed in the nation’s working men and women, and she said a key priority is to work with the administration and Congress to help the unemployed find work.

Labor Day, she said, should be a time “to pay respect to all workers. Don’t just go celebrate by spending money, by shopping. … Yes, it’s an important time to be with your family. It’s also an important time to reflect on the many gifts we have, because of the hard work of people.”

Things we take for granted today, like a 40-hour workweek, health benefits and pensions, and laws on workplace safety, are part of the fabric of American life today because of the sacrifices of people in the labor movement, she said.