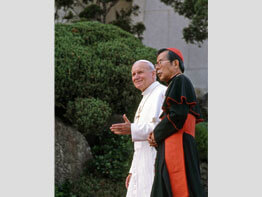 At the time of his death, Cardinal Stephen Kim Sou-hwan was the longest-serving cardinal in the Roman Catholic Church, having been named to the College of Cardinals nearly 40 years ago by Pope Paul VI.

In a telegram Feb. 16 offering his condolences to Cardinal Nicholas Cheong Jin-suk of Seoul, Pope Benedict XVI recalled “with gratitude Cardinal Kim’s long years of devoted service to the Catholic community in Seoul and his many years of faithful assistance to the Holy Father as a member of the College of Cardinals.”

Cardinal Kim’s death leaves the College of Cardinals with 188 members, 115 of whom are under age 80 and therefore eligible to vote in a papal conclave.

Born in Daegu in May 1922, the late cardinal was ordained a priest in 1951. He carried out his pastoral ministry in Daegu during the Korean War before earning a degree in philosophy at the Catholic University of Jochi Daigaku in Tokyo, Japan.

Back in Korea, he ran the Catholic newspaper, the “Catholic Shilbo.”

The Korean cardinal continued his studies in Munster, Germany, from 1956 to1965, specializing in social sciences. He was then named bishop of Masan, Korea, in 1966.

He was named archbishop of Seoul just two years later and served as head of the archdiocese for 30 years until his retirement in 1998.

Pope Paul VI made him Korea’s first cardinal when he elevated the 46-year-old archbishop during a consistory in 1969.

As archbishop of Seoul, Cardinal Kim intensified “a spirit of conciliar renewal in the diocese and intensified evangelizing activities in which he invited the lay faithful to participate,” said a biography released by the Vatican press office Feb. 16. The cardinal had called on the laity to evangelize North Koreans, whose communist government restricts their religious freedom.

The cardinal was also dedicated to interreligious dialogue and coordinating diverse charitable and social service activities, the Vatican biography said.

In 1999, Cardinal Kim said religious fundamentalism was rising in Asia and posed a real problem for the church. While the church should always have the right to proclaim that Christ is the way and the truth for all people, he had said things were not that simple on the ground.

He said for Catholics it was absolutely essential for church members to have a better appreciation for other religions and recognize that they contain “precious jewels” for Christians, as the Second Vatican Council taught.

His declarations and initiatives promoting and defending human rights were “quite courageous” given the “difficult internal political situation” at the time, the Vatican biography said.

From 1975 to 1998, the cardinal also served as apostolic administrator of the Pyongyang Diocese in North Korea.

One of the main focuses of the cardinal’s work had been pressing for reconciliation between North and South Korea and for freedom of religion in the communist North.

He joined other South Korean religious leaders in urging North and South Korea to resolve heightened tensions through dialogue and cooperation.

Cardinal Kim and the local church came to be seen as defenders of human rights against dictatorships in the 1970s and 1980s, reported the Asian church news agency UCA News.

Seoul’s Myongdong Cathedral was seen as a prominent symbol of the people’s aspirations for democratization and many local people have called the late cardinal the guardian of human rights and democracy, UCA News reported Feb. 16.

He often told people that his journey to the priesthood was not easy; he was forced to serve in the Japanese army during the World War II when he was a seminarian, according to the news agency.

His contribution to the church in Asia was acknowledged when he was named one of the three president delegates of the special assembly of the Synod of Bishops for Asia held at the Vatican in 1998, UCA News said.