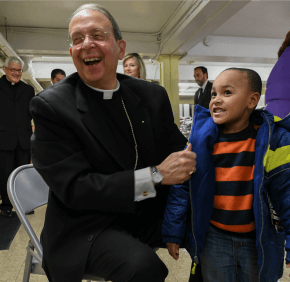 One day after a cold front blew into the Mid-Atlantic region, the Maryland Knights of Columbus lessened the impact of that seasonal change for 1,700 children.

“The first principle of the Knights of Columbus is charity, it’s love, service toward those in need,” Archbishop Lori said. “One of the needs we find of young people living in urban centers is simply the need for a warm coat.”

The outreach figures to warm, figuratively and literally, Ss. James and John School, which serves as a beacon for 227 students. It receives support from five parishes, including St. Ignatius in Baltimore, where Jesuit Father James Casciotti is the pastor.

“This is an old building, but when you come in, you can see that the children are learning and that there’s a real commitment and love for them,” Father Casciotti said. “You can feel it when you walk in the door, it really is a community school. A lot of that comes from the principal, as a leader, she creates that.”

LaUanah King-Cassell is in her 31st year as principal of Ss. James and John. Between grants and the new BOOST scholarships, her average family is paying approximately $2,500 in tuition this year.

“For many, that is a struggle,” King-Cassell said, “but families are here for that community feel. Every parent here says, ‘it’s a secret.’”

Alicia Freeman, the second-year principal of Archbishop Borders School, “we have a diverse community, but for those in dire need, this is an incredible gift.”

The Knights’ version of “Coats for Kids” began in New Haven, their national headquarters, and spread to Maryland in 2014. Last year, the Knights and Archbishop Lori teamed to distribute coats at St. Edward Parish, in the troubled Sandtown-Winchester community.

“This program has grown across the United States,” said Steve Cohen, state deputy of the Maryland Knights.

“This is a very worthwhile program,” Trott said. “No kid should be cold.”

Trott and Chris Powers, the state advocate, were heading from Ss. James and John to the Apostleship of the Sea in Dundalk, to deliver toiletries and other donated items for seafarers.

“Charity is contagious,” Archbishop Lori said. “It’s the beginning of a new liturgical year with the first Sunday of Advent (Nov. 27). It’s a wonderful time to say, ‘you know, I’m going to spend the year ahead living out the Lord’s love.

“We just had the Year of Mercy, God showed us all kinds of forgiveness and love through Pope Francis. Now we extend that mercy by serving those in need.”

Faith, celibacy and spirituality among day two topics at BYCC 2016