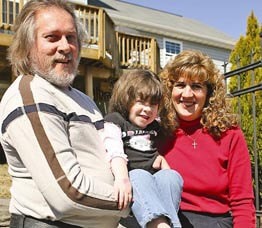 Louis Stachowiak Jr. was running a little late for Mass one Sunday morning some 10 years ago and it changed his life forever. One of the ushers placed him in a pew next to the woman who would soon become his wife.

The Stachowiak family has been chosen as the Knights of Columbus Family of the Year. Mr. Stachowiak has been a member of the Westminster Council 1393 for nine years while his wife helped to start the ladies auxiliary just over a year ago.

“I’m honored,” said Mr. Stachowiak, 55. “We are very proud of our church and council for all of the things they do.”

Mr. Stachowiak said around the time he met his wife, Theresa, he was looking to become more involved with the church. Mrs. Stachowiak had just become an extraordinary minister of holy Communion, and she encouraged Mr. Stachowiak to do the same. He also spoke to Monsignor Arthur Valenzano, pastor of St. John, who directed him to get involved with as many church activities as possible, especially the Knights of Columbus.

“My interest was in spiritual growth and growth in the church,” said Mr. Stachowiak.
Over the years, Mr. Stachowiak has been involved in a variety of different roles in the Knights of Columbus and the community. He is a member of the James Cardinal Gibbons Assembly, program director of his council, a grand Knight from 2005-2006, council chancellor from 2003-2004, managed the Baltimore Orioles concession stand for the Knights for four years and the Ravens concession stand this year. He was the spring dance committee chairman, rosary committee chairman, member of the 1st degree team, council liaison to St. John parish and Portico events and so much more.

“It’s my belief that every Catholic man should be a member (of the Knights),” said Mr. Stachowiak. “Taking on a leadership role, you get support from people who are willing to help you. You learn to listen more and talk less.”

The Stachowiaks along with their daughter, Kathryn, help with the monthly parish breakfasts. The couple is involved in the RCIA program and Bible study. Mr. Stachowiak and his daughter help to set up all of the parish functions at the Portico, the parish meeting hall, and the family shares a weekly Holy Hour together before the Eucharist.
“I feel the Knights are a family organization,” said Mrs. Stachowiak, 46. “They have a great commitment to the parish and community.”

Mr. Stachowiak is involved with the prison ministry at the Carroll County detention center, and the whole family has marched in the Columbus Day parade in Baltimore and the Memorial Day parade in Westminster. They are members of GRREAT, Golden Retriever Rescue Education and Training and have fostered more than 35 dogs. Mr. and Mrs. Stachowiak designed the Maryland License Plate program for the GRREAT and Mrs. Stachowiak continues to chair the committee. The whole family is involved in the Carroll County School of Performing Arts.

“Everything we do is faith oriented,” said the Knight. “We don’t mind helping others and we don’t expect rewards for that. If we can lead people closer to Christ we are achieving our goal.”