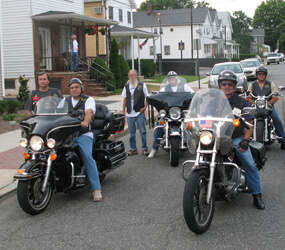 RARITAN BOROUGH, N.J. – When about 15 men on motorcycles wearing “colors” or leather vests arrived at St. Ann Church, they weren’t looking for trouble.

Rather, as members of the Knights of Columbus Motorcycle Ministry, they came to their monthly meeting to help spread the Gospel through the order’s principles of charity, unity and fraternity.

George Muniz, a member of Council 9199, Our Lady of Peace Parish in Fords, said the motorcycle ministry gives him an opportunity to help others and enjoy the outdoors at the same time.

Riding can also be a “spiritual” experience because it provides time to pray, he said.

“I wanted to join because I have been riding a motorcycle most of my life,” said Muniz, a member of Our Lady of Fatima Parish in Piscataway, who serves as a maintenance employee at three parishes in Perth Amboy.

“Last weekend, I went to the Delaware Water Gap by myself. I stopped by a little stream and sat there for 20 minutes, listening to the water ripple,” Muniz said. “I am also one of those guys who make the sign of the cross whenever I ride by a church.”

With Father Edmund A. Luciano III, parochial vicar at St. Ann Parish, serving as chaplain, the ministry’s meeting began with prayer and the Pledge of Allegiance.

John Brandon, founder and president, then led the 90-minute session in businesslike fashion interspersed with humorous anecdotes and some mild ribbing from members.

Minutes of the previous meeting were reviewed, old and new business was taken care of, finances were disclosed and plans were made for future charity events.

After ending the meeting with a prayer, Father Luciano said he is happy to see anyone trying to follow in Jesus’ footsteps, even a group as unique as the motorcycle ministry.

“The Gospel comes to us in our everyday lives and riding is part of their everyday lives,” he said. “Pope John Paul II encouraged us to go for the new evangelization. I don’t know if this is what he had in mind but it is certainly the spirit of it.

“And as Knights it is something that these gentlemen were doing anyway, so it makes perfect sense to put the two together.”

For Brandon, the organization also offers an opportunity to change the negative image some people have of motorcyclists.

“It is not 800 guys living in a house all carrying guns,” Brandon said. “Nobody is here to knock over a grocery store or sell drugs.”

The motorcycle ministry’s roots go back about three years when Brandon, a member of St. Mary Parish in Middletown, started it with members from local councils.

With the approval of Thomas Ciborski, immediate past state deputy, the ministry was given the green light to go statewide, Brandon said.

“I told him there are a lot of guys that would join the Knights if they knew there was a motorcycle ministry,” Brandon said.

Since registration began at the Knights’ annual state convention in Wildwood in May, more than 100 members have joined, including 30 from the Diocese of Metuchen, Brandon said.

New members are welcome from any of the five dioceses in New Jersey whether they own a motorcycle or not. Meetings are held once a month and rotate from council to council.

The goal of the ministry is to eventually split into chapters by diocese once it gets large enough, said Douglas Myslinski, grand knight of Sgt. Frank Basilone Council 13264 in Raritan Borough.