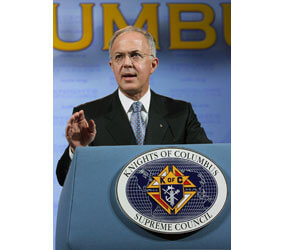 PHOENIX – More than 2,500 Knights of Columbus and their families from all over the world joined 80 bishops and eight cardinals for an Aug. 4 Mass inaugurating the Knights’ 127th annual supreme convention.

Phoenix Bishop Thomas J. Olmsted – a Knight himself – was the main celebrant at the multilingual Mass, during which he praised Father Michael McGivney, who founded the charitable organization in 1882.

The bishop said the day was a “celebration in gratitude to God” for the good work begun by Father McGivney.

The Knights of Columbus is the church’s largest lay organization with 1.78 million members from 11 countries on three continents. In 2008, Knights contributed $150 million for a multitude of charitable causes in addition to volunteering 68 million hours of their time.

During their convention, Knights attend seminars and vote on resolutions for the next year. But for many attendees, it’s the fraternity of the conventions that keeps them coming back.

Ian Moore has been a Knight of Columbus for the past 27 years in the Archdiocese of Kingston, Ontario, but he had never attended a supreme convention before. This year, he was elected to be his council’s delegate.

“It’s just Knights consistently everywhere you turn,” he said of the gathering. “It only reinforces our whole fraternal thing. It’s a wonderful aspect.”

Moore attended a committee meeting Aug. 3 on the Knights in Canada and was to make an official report to his council when he returned at week’s end. He said the convention is important in that it brings to light all the good work being done by Knights across the globe.

“It just makes you feel so proud to be a Knight,” Moore said. “What little jobs we do on the front lines make such a huge impact.”

Jesuit Father Charles Connelly, who lives in Boston, said the work of the Knights is staggering, and can be difficult to comprehend.

“When you consider 1.7 million men engaged in Catholic work – you only understand that when you come to the supreme convention,” he told The Catholic Sun, newspaper of the Phoenix Diocese.

Following the Mass, Supreme Knight Carl Anderson delivered the organization’s annual report, during which he called for health care reform that is abortion-free.

“A health care system designed to save lives on the one hand must not become a vehicle for taking lives through abortion and euthanasia,” Anderson said.

He also pledged to expand the Knights’ initiative to place ultrasound machines in crisis pregnancy centers across the country.

“Up to 90 percent of women considering abortion choose to have their babies after seeing an ultrasound image,” Anderson said. “They hear their baby’s heartbeat; they see their baby’s head and fingers. They know that their baby is a child, not a choice.”

During the convention, the Knights were to vote on resolutions on such topics as abortion, marriage, rights of conscience, pornography and violence.