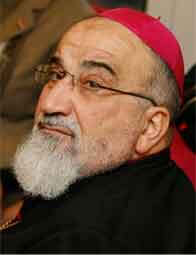 ROME – Kidnappers abducted Chaldean Catholic Archbishop Paulos Faraj Rahho of Mosul, Iraq, and killed the three people who were traveling with him.

Chaldean Bishop Rabban al Qas of Arbil told the Rome-based missionary news service AsiaNews that Mosul’s archbishop was kidnapped late Feb. 29 after he finished leading the Way of the Cross.

Archbishop Rahho had just left the Church of the Holy Spirit in Mosul and was in his car with three other men when the kidnappers attacked.

“The bishop is in the hands of terrorists,” Bishop Qas told AsiaNews.

“But we don’t know what physical condition (the archbishop is in); the three men who were with him in the car, including his driver, were killed,” he explained.

“It’s a terrible time for our church; pray for us,” he said.

The kidnappers have reportedly communicated their demands, which were not made public.

The incident comes less than a year after a Chaldean Catholic priest and three subdeacons were gunned down outside the same Mosul church.

Father Ganni, the three subdeacons, and the wife of one of the subdeacons were driving away from the church when their car was blocked by a group of armed militants, according to AsiaNews.

The armed men forced the woman out of the car. Once the woman was away from the vehicle the armed men opened fire on Father Ganni and the three subdeacons. Subdeacon is an ordination rank lower than deacon in most Eastern Catholic churches.

The militants then placed explosives around the car to prevent anyone from retrieving the four bodies. Later that night, authorities finally managed to defuse the explosives and retrieve the bodies.