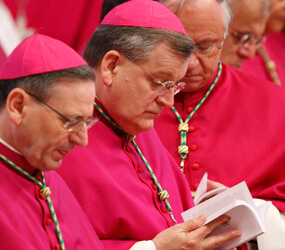 VATICAN CITY – Pope Benedict XVI’s naming of U.S. Archbishop Raymond L. Burke to the Congregation for Bishops was a small but significant appointment that could have an impact on the wider church for many years to come.

The congregation’s members generally meet every two weeks to review candidates for vacant dioceses and make their recommendations to the pope – recommendations that carry a lot of weight. Precisely for that reason, the Congregation for Bishops is known as one of the most important Roman Curia agencies.

Membership on the congregation is a five-year appointment, which could be renewed until a prelate’s 80th birthday. It would not be an exaggeration to say that Archbishop Burke, 61, will be helping to shape the episcopate, not only in the United States but also around the world.

Formerly the archbishop of St. Louis, Archbishop Burke was named in 2008 as head of the Vatican’s highest tribunal, known as the Supreme Court of the Apostolic Signature. At the time, pundits wondered whether the appointment would in effect sideline someone who had been one of the most outspoken U.S. bishops on moral and political issues.

Archbishop Burke has been anything but silent, however. Since his Vatican appointment, he has insisted that holy Communion be refused to Catholic politicians who actively support legal abortion, said the Democratic Party in the United States “risks transforming itself definitively into a ‘party of death,’ ” and said nothing could justify casting a ballot for a candidate who supports “anti-life” and “anti-family” legislation.

In mid-October, he celebrated a pontifical high Mass in St. Peter’s Basilica using the 1962 Roman Missal, known as the Tridentine rite – the first time that has happened in almost 40 years.

Archbishop Burke, who is expected to be named a cardinal in coming months, will join about 30 other cardinal and bishop members of the Congregation for Bishops. Although the congregation’s work is strictly confidential, sources explained in detail what the archbishop will be doing in his new role.

Unlike several other Roman Curia agencies, which may draw their full membership together only once a year, the Congregation for Bishops meets regularly every two weeks. The meetings last all morning, and typically bishops’ appointments for four dioceses are reviewed at each session.

Even before the meeting, congregation members are sent abundant documentation on the candidates for each diocese, and they are expected to be familiar with the material. This is information collected by the apostolic nuncio in the country where the diocese is located; a large part of the packet is comprised of the written evaluations requested of some 30 to 40 people who know the candidate.

At the congregation’s meeting, one member acts as the “ponente,” or presenter, reviewing the information and making his own recommendation on the “terna,” or list, of three candidates. Each member, in order of seniority, is then asked to give his views – in effect, offering a judgment on whether the candidates are worthy and suitable, and in what order they should be recommended.

One thing is certain: Being a member of the Congregation for Bishops is a time-consuming task. Insiders say the preparation work for each meeting takes many hours. And the congregation members are expected to show up for the meetings – which helps explain why all but a handful of the members are cardinals and bishops living in Rome.

More importantly, members know they are dealing with decisions that will affect the future of the church and the salvation of souls.

“It’s a very serious procedure, because a bishop has a heavy responsibility in the church. It’s an exercise in prudential judgment, and the weight of it is felt by everyone involved,” said one Vatican official.

Archbishop Burke joins three other U.S. members of the congregation. Two of them, Cardinal Bernard F. Law and Cardinal J. Francis Stafford, reside in Rome, while the third, Cardinal Justin Rigali, is the archbishop of Philadelphia.

Very occasionally, for a vacancy in a U.S. diocese, the U.S. members may have input at an earlier stage, if they are asked by the nuncio to recommend candidates or comment on the state of the diocese.

Congregation members do give particular attention to appointments in their native countries, but more often than not they are looking beyond their home borders: In 2007, for example, of the 179 bishops’ appointments handled by the congregation, only 13 were in the United States.