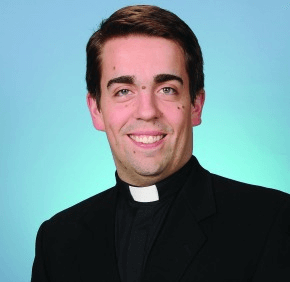 By Catholic Review Staff
Kevin Ewing will be ordained a transitional deacon May 21, the final step before he becomes a priest of the Archdiocese of Baltimore in 2017.
The ordination Mass will be held at 10 a.m., at the Basilica of the National Shrine of the Assumption of the Blessed Virgin Mary in Baltimore. It will include Scott Rose, a parishioner of Holy Family in Middleton, becoming a permanent deacon for the archdiocese. He is the son of Deacon Al Rose.
Ewing, 28, is the son of Mark and Elizabeth Ewing. According to a biography prepared by the archdiocesan vocations office, he was raised in St. John the Evangelist Parish in Hydes, and attended its parish school. He then graduated from Calvert Hall College High School in Towson, and earned a bachelor of science degree in psychology from the University of Maryland in 2010.
During Ewing’s time in College Park, as a member of the University’s Catholic Student Center, he began to discern a calling to the priesthood.
He entered St. Mary’s Seminary and University in Roland Park, and in 2012 the North American College in Rome, where he earned a degree in Sacred Theology from the Pontifical University of St. Thomas Aquinas in 2015.
Ewing’s current pastoral assignment is to St. John the Evangelist Parish in Severna Park. His previous pastoral assignments were with Ascension Parish in Halethorpe, St. Mary’s Parish in Hagerstown and the Catholic Community of South Baltimore, as well as his home parish in Hydes.
He has taught religious education and the Rite of Christian Initiation of Adults, ministered to the sick and homebound, and served the poor.