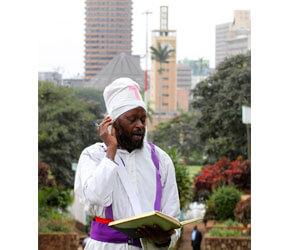 NAIROBI, Kenya – The Catholic Church in Kenya has called for a day of prayer June 27 as voters consider their stance on a referendum on the country’s draft constitution.

In a letter read at Masses throughout Kenya June 19-20, Cardinal John Njue of Nairobi, chairman of the Kenya Episcopal Conference, asked that prayers be offered to seek God’s guidance during a particularly trying time in the country’s history.

The letter urged Christians to reject the proposed constitution and to pray for peace during the period leading to the Aug. 4 vote.

“As a country we are praying for a peaceful referendum and campaign to continue without dividing Kenyans on tribal lines,” Cardinal Njue said, quoting from the letter during Mass at the Cathedral Basilica of the Holy Family in the Kenyan capital June 20.

The Kenyan bishops have opposed the draft constitution, which includes clauses they believe could lead to the legalization of abortion and the entrenchment of Islamic courts.

In a May 11 statement, the bishops said the constitution was “fundamentally flawed” and should not be passed with the “very vague hope that it will be amended later.”

The proposed constitution would keep abortion illegal, but includes exceptions if, “in the opinion of a trained health professional, there is need for emergency treatment, or the life or health of the mother is in danger, or if permitted by any other written law.”

The document also limits the powers of the Kenyan presidency and includes sections on judicial reform, land reform and an end to impunity.

Other Christian leaders have sided with the bishops in opposing the document because of the abortion clause.

Meanwhile, Kenyan authorities continued to investigate the bombing of a June 13 prayer service called to oppose the proposed constitution.

Six Kenyans died in Nairobi’s Uhuru Park when an unknown person lobbed a grenade into the gathering. Dozens more were injured.