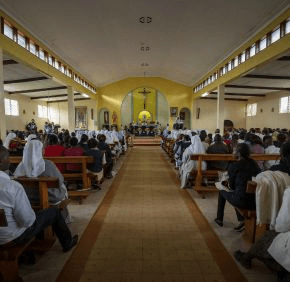 By Walter Cheruiyot
Catholic News Service
NAIROBI, Kenya – With U.S. President Barack Obama set to visit Kenya July 24-26, the head of the nation’s bishops’ conference said the church will resist any pressure to accept same-sex marriages.
“We are not going to allow same-sex marriage,” said Bishop Philip Anyolo of Homa Bay, noting that the Kenyan church considers this unacceptable and urges its advocates to “stop the debate.”
Bishop Anyolo, president of the Kenya Conference of Catholic Bishops, told Catholic News Service in early July that while the bishops welcomed Obama’s visit, the church “has a prophetic mission to protect holy matrimony,” which “the Bible (makes) clear” is between a man and a woman.
Kenyan Deputy President William Ruto told a church congregation in Nairobi July 5 that “homosexuality is against the plan of God,” according to media reports.
Ruto, who is on trial at the International Criminal Court in The Hague over allegations that he organized tribal violence in the 2007 elections, said Kenya will resist any attempts by Obama or other leaders to make Kenya legalize gay marriage.
In most of Africa’s 54 countries, lesbian, gay, bisexual and transgender people have to hide their sexual orientation for fear of persecution or criminal prosecution. South Africa, where same-sex marriage has been legal since 2006, is the only African country that permits gay unions.
“There are far more pressing issues” than same-sex marriage that the church in Africa needs to address, including corruption, refugees and poverty, said Jesuit Father Russell Pollitt, director of the Johannesburg-based Jesuit Institute, in a July 11 telephone interview.
It will be “sad and a missed opportunity if the focus of Obama’s visit is narrow” rather than on the “pressing problems that cause great suffering to the poor,” covered in Pope Francis’ environmental encyclical, Father Pollitt said. Released June 18, “Laudato Si’, on Care for Our Common Home,” calls for urgent action to address threats to all life on earth and to work for the common good.
Meeting in early July, Nigeria’s Catholic bishops called the U.S. Supreme Court’s late-June ruling on gay unions, as well as rights granted in other Western countries, “a sad, unjust and lamentable situation based largely upon a distorted perception of natural law, the will of God and human nature.”
These countries “undeniably have cultural, social and economic influence upon many African nations, including Nigeria,” the bishops’ conference said in a July 8 statement.
“These countries also generate a lot of the media content consumed in our country and continent as well as much of the educational materials used in our schools,” the bishops said, noting that “they also give generous humanitarian aid to various establishments and projects” in Africa.
“In these ways, their views, thoughts and trends are easily embedded into the heart of our society,” they said, noting their concern at “the persistent and continuous propagation and globalization of the homosexual lifestyle and the effort to redefine marriage.”
Accepting “this Western trend … will be devastating and detrimental to our nation,” the Nigerian bishops said.
Father S’milo Mngadi, communications officer for the Southern African Catholic Bishops’ Conference, said South African churches seem to be “more tolerant of others” than their counterparts in many other African countries, although that does not necessarily mean Catholics agree with what others do.
“But what is of concern to us is the attaching of conditions to aid” by donor countries, he said.
“This is a Christian perspective, not an African perspective, because this is a problem all over the world,” Father Mngadi said. “Aid should not be used as a coercive tool to impose any set of values.
After Uganda’s anti-gay law came into effect early 2014, Comboni Father John Baptist Keraryo Opargiw, a Ugandan at Comboni headquarters in Rome, said the “issue of homosexuality and lesbianism in Africa is one which is a challenge to the cultural integrity and moral fabric” of African societies.
“Many see the phenomenon as un-African and against African social and religious heritage. Homosexual lifestyle is perceived to be against nature,” he said.
The priest added: “Just over a century ago, homosexuality was an abomination in the West but has worked its way to legitimacy. Will Africa follow suit, letting her cultural values and norms in this regard evolve?”
Contributing to this story was Father Don Bosco Onyalla.
PrevNext