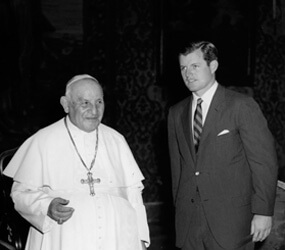 WASHINGTON – Catholic leaders from coast to coast praised the late Sen. Edward M. Kennedy for his nearly 50 years of public service, but at least one expressed sorrow that his commitment to the less fortunate did not extend to the unborn.

The Massachusetts Democrat and son of one of the nation’s most famous Catholic families died late Aug. 25 at his home on Cape Cod after a yearlong battle with a malignant brain tumor.

“For nearly half a century, Sen. Kennedy was often a champion for the poor, the less fortunate and those seeking a better life,” said Cardinal Sean P. O’Malley of Boston. “Across Massachusetts and the nation, his legacy will be carried on through the lives of those he served.”

Los Angeles Cardinal Roger M. Mahony, who worked with Kennedy in an unsuccessful effort to achieve comprehensive immigration reform in 2007, said “the voiceless, the powerless and the most needy of our citizens have lost a great champion” with the senator’s death.

“His deep and personal commitment to causes affecting the poor and needy among us flowed from his deep Catholic faith, and the life and outreach of Jesus Christ,” he added.

“Over the years, however, I was never able to bring him to promote fundamental rights for one important group in our society – the unborn,” Cardinal Mahony said. “But he did struggle with this aspect of his Catholic faith, and I was hopeful that at some point he would see that all of his work for the most needy had to begin with a commitment to every person – born and unborn.”

Archbishop Donald W. Wuerl of Washington said Kennedy’s “lasting legacies” would stem from “his commitment to alleviating poverty, advocating for the rights of workers and seeking affordable health care.”

“As a result, thousands of disadvantaged children in the District of Columbia have had their lives transformed through a quality Catholic education,” he said.

The Vatican newspaper, L’Osservatore Romano, reported the news of Kennedy’s death on an inside page with a brief summary of his career.

“Consistently winning re-election to the Senate, Edward Kennedy was constantly in the front lines of battles such as those for protection of immigrants, arms control and a minimum wage for the less well-off. But unfortunately he also took positions favorable to abortion,” it said.

The newspaper noted that his leaving the scene of a 1969 car accident that killed a passenger, Mary Jo Kopechne, had hurt Kennedy’s national political career.

Vatican Radio also reported the news of Kennedy’s death and interviewed Giuseppe Mammarella, a retired professor of international relations at Stanford University in California, who described Kennedy as one of the most influential and productive U.S. senators.

“His work throughout the years led to approval of a whole series of laws that treated themes like immigration, health care, civil rights. In other words, these were not isolated successes,” Mammarella said.

The Rev. Jim Wallis, executive director and CEO of Sojourners, a progressive evangelical organization that addresses justice issues, recalled meeting with Kennedy and his wife, Vicki, at their home after the November 2004 elections to discuss “the relationship between faith, morality and politics.”

“Their own deep Catholic faith was evident and their articulation of it very impressive,” he said. “Our discussion was not partisan at all – it was not about how to win religion back for the Democrats. Rather, we focused on the great moral issues facing the nation, and how we as people of faith needed to respond to them.”

Rev. Wallis said he hoped Kennedy’s death would “now move us as a nation to address the greatest commitment of Sen. Kennedy’s life – the need for a comprehensive reform of the health care system in America – as a deeply moral issue and one that calls forth the very best that is within us.”

David Harris, executive director of the American Jewish Committee, said Kennedy “was a political giant, a man who devoted his life to deepening our historic commitment as a nation to the promise of America.”

“The values of compassion for the less fortunate, which Sen. Kennedy passionately defended during nearly five decades in the Senate, shall be his lasting contribution to the country he loved,” Harris added.

Vice President Joe Biden said Kennedy death’s has “left a great void in our public life and a hole in the hearts of millions of Americans and hundreds of us who were affected by his personal touch throughout our lives. People like me, who came to rely on him. He was kind of like an anchor.”

President Barack Obama said Kennedy was “not only one of the greatest senators of our time, but one of the most accomplished Americans ever to serve our democracy.”

“His ideas and ideals are stamped on scores of laws and reflected in millions of lives – in seniors who know new dignity, in families that know new opportunity, in children who know education’s promise, and in all who can pursue their dream in an America that is more equal and more just – including myself,” Obama added.

The president ordered that the U.S. flag be flown at half-mast on all naval vessels and half-staff at the White House and all federal government buildings in the U.S. and embassies overseas.

Beyond the U.S., Kennedy drew praise for his work on behalf of Irish immigrants to the United States and for the peace process in Northern Ireland.

“The Irish immigrant community in the United States has lost a very strong advocate for justice,” said Bishop Seamus Hegarty of Derry, chairman of the Irish Episcopal Council for Emigrants. “Among his many works, his efforts in seeking to enact comprehensive immigration reform made the wider public aware of the plight of immigrants and of Irish immigrants in particular.”

Former Irish Prime Minister Bertie Ahern, who negotiated the 1998 Northern Ireland peace agreement with then-British Prime Minister Tony Blair, said in an Aug. 26 radio interview that, in addition to his role in the peace process, Kennedy also helped to develop the Irish economy in countless ways. Ahern also said the senator would also be warmly remembered for his great sense of fun.