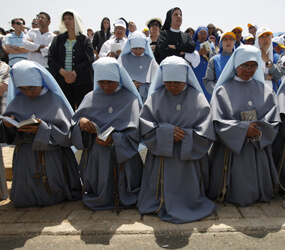 NAZARETH, Israel – Celebrating Mass in Nazareth, the hometown of the Holy Family, Pope Benedict XVI urged the region’s people to keep their family bonds strong and to extend that love and acceptance to others, whether Christian or Muslim.

“Let everyone reject the destructive power of hatred and prejudice, which kills men’s souls before it kills their bodies,” the pope said during his homily at the May 14 Mass on Nazareth’s Mount Precipice.

The Mass at the new amphitheater, built into the hillside, drew the largest crowd of the pope’s eight-day pilgrimage to the Holy Land; organizers said 40,000 people attended.

Taking place in the town where the angel Gabriel announced to Mary that she would bear the savior and where she and Joseph raised Jesus, the Mass was focused on the family.

But Pope Benedict also had strong words of encouragement for the Christian and Muslim communities of northern Israel, especially for those in Nazareth, where a decade of tensions over building a mosque near the Basilica of the Annunciation have continued to sour relations between the two communities.

The Israeli government eventually withdrew permission for the mosque to be built, and the site now is a small park.

A month before the Mass, a Muslim group opposed to the papal visit hung a banner between two trees in the park; the banner – in English and Arabic – warned that anyone who speaks against the prophet Mohammed would be cursed by God in this world and in the hereafter.

The group that hung the sign said it was addressed to the pope, who had offended many Muslims in 2006 when he quoted a medieval emperor’s criticism of Mohammed.

In his homily, Pope Benedict said, “Let us reaffirm here our commitment to be a leaven of respect and love in the world around us.”

The pope asked Christians and Muslims in Nazareth “to repair the damage that has been done, and in fidelity to our common belief in one God, the father of the human family, to work to build bridges and find the way to a peaceful coexistence.”

Khoury, a mother of two, said children learn prejudice in their own families and in school, “and I don’t allow my children to speak that way in my home.”

The papal Mass drew not only Catholics of various rites and Christians from many denominations, but also Muslims, including Mohammed Safadi, 35, and his wife, Samiha, who came with their infant son from Raine, a village near Nazareth.

“For us every religion comes from God,” he said. “I did not decide to be Muslim and the Christians did not choose to be born Christians.”

He said he thought there were not as many tensions between Muslims and Christians in northern Israel as there were in other parts of the Middle East, but he hoped things would be even better.

“I wish we could all come together like this and join in prayer and be at peace,” he said.

“It’s a beautiful thing” to participate in a Christian liturgy, “we are brothers after all,” Safadi said, adding, “I hope they also will join with Muslims in our religious ceremonies.”

Nabila Shinara, 35, came to the Mass with her husband and two children from Muquebly, a largely Orthodox village surrounded by five Muslim villages. She said the Christians and Muslims get along well and could be an example for others in the Holy Land.

Nevertheless, she said, as a member of the Catholic minority she felt an important sense of belonging at the papal Mass.

“To be together and to pray together is important, and what makes this happen is the presence of the pope,” she said.

In his homily Pope Benedict urged married couples to show others how fidelity to one another and a commitment to educating children in solid moral values can make societies stronger.

“In the family each person, whether the smallest child or the oldest relative, is valued for himself or herself, and not seen simply as a means to some other end,” he said.

The example of Mary and Joseph also demonstrates the “need to acknowledge and respect the God-given dignity and proper role of women,” and the possibility of a “manly piety” in which authority is placed at the service of love, he said.

Diana Yaqub, a 37-year-old mother of two and an engineer who worked on the Mount Precipice amphitheater, said: “The woman is the center of the family. If the mother is not home, there is no order. God gives women the strength to do their work.”

Yaqub, a Melkite Catholic, was pleased with the pope’s remarks about the importance of women.

“It is important that someone gives us importance, and when it’s the pope that’s even more important,” she said.

Pope Benedict also spoke of the importance of education for the future of Catholics in the Holy Land and praised the network of Catholic schools that, accepting both Christian and Muslim students, promote solidarity, justice and peace.

Welcoming the pope to the Mass, Melkite Archbishop Elias Chacour of Haifa announced that the university he is building in the Galilee town of Ibillin will be named Pope Benedict XVI University.

“Our educational institutions, our schools, are our first priority because they are the instrument for spreading the message of Christ, for spreading the spirit of reconciliation,” the archbishop said. “Our schools struggle to survive and make great sacrifices, but we keep moving forward.”

The archbishop also asked the pope to encourage greater support for efforts to help Christians stay in the Holy Land and to help the people of Biram and Ikrit, Arab villages expropriated by Israel after its 1948 declaration of independence.

Archbishop Chacour was born in Biram, and he told Catholic News Service in April that although the Israeli courts have recognized villagers’ right to return and to be compensated for their loses, Israeli security allows them to enter the villages only to celebrate weddings and to bury their dead.