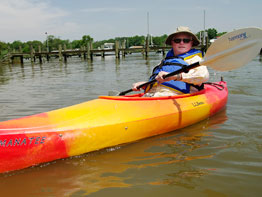 Father Brian Rafferty has a motor that won’t stop and the arms to match.

After celebrating two early morning Masses at Our Lady of the Chesapeake, Lake Shore, on a sweltering June morning, the pastor was ready for more.

A swarm of people wanted to talk with Father “Raff,” as he wants to be called, get a hug and ask for confession. He obliged each at the Pasadena parish and looked at a young man he had an appointment with and said, “I’ll be right with you, dude.”

Less than two hours later, the youthful 70-year-old, West Baltimore-native walked out onto the shores of the Magothy River and put his kayak into the water. Every two weeks, Father Rafferty uses the backyard of parishioners Joe and Valerie Smith to launch his kayak, which he stores at the home.

“We’re very lucky,” Mrs. Smith said of her pastor, who she said is like an uncle, or even an older brother, to her children.

The son of a man who was in the tugboat shipping business and a self-described “water baby,” pushed out quickly, exclaiming “Wheeee” as he departed. He has had bigger boats during his 16-year stewardship of Our Lady of the Chesapeake, but this one takes the least amount of care.

Covering his face with a bucket hat and donning jeans and a life jacket over his plaid shirt, Father Rafferty went to the end of the dock, where a boat containing members of the Smith family was sitting. Even as he moved through the water, he casually joked with them.

He made it all look effortless as he put the oars in the water, moving his arms back and forth. There was not a sense of tiredness.

“I tell you, in a kayak, you see the world from a totally different angle,” Father Rafferty said before going out on the water. “You can go under piers. It’s almost like a religious experience because it gives you a great time to reflect. I just love it.”

Father Rafferty said he typically maneuvers through the Magothy up to two hours. He will cut it short if the sun begins to burn his Irish skin.

When asked if the activity was at all strenuous, Father Rafferty released an elongated “noooooo” that hinted at his homegrown Baltimore accent.

Besides his kayaking, Father Rafferty gets his exercise by walking and working on the lawn at his house, which sits a few blocks from Our Lady of the Chesapeake.

Still, he said the opportunity to see natural wildlife and the serenity of the water has kept him going back to the kayak.

He said his priestly friends and parishioners also keep him energetic about the days ahead.

“I’m just around a lot of people,” Father Rafferty said, “who like to stretch your brain.”