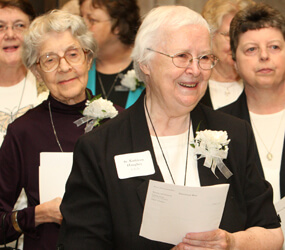 During a special May 1 Mass at the Cathedral of Mary Our Queen in Homeland, Archbishop Edwin F. O’Brien honored the combined 5,750 years of service of 101 religious priests, sisters and brothers living in the Archdiocese of Baltimore.

“In living out your call to a communal life, evangelical poverty, perfect chastity and complete obedience,” Archbishop O’Brien said in his homily, “you not only reflect the selflessness that was the hallmark of the apostolic church.

“Indeed,” he continued, “you reflect the earthly life of Jesus, whose poverty offered him no place to lay his head, whose chastity enabled him to take only the church as his bride and whose obedience to the father led him to the cross for the salvation of the world.”

The archbishop called the varied charisms of the many orders represented at the Mass a “mosaic” through which the Holy Spirit allows the image of Christ and the mystery and mission of the church to shine forth – contributing to the renewal of society, he said.

“I would dare say that in our relatively brief history, no local church enjoys more or has profited more than does the church of Baltimore from the vowed life of men and women religious placed in service to God’s holy people,” Archbishop O’Brien said, “to the poor and the sick, to the homeless and the hungry, in food lines and the elderly in residences, and to young of all ages in schools, universities and parish centers.”