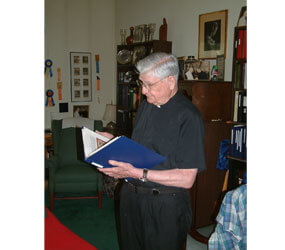 Josephite Father Edward J. Mullowney was just a young lad when in 1929 the Vatican became a sovereign city state through the Lateran Treaty made between Pope Piux XI and Italy’s Fascist prime minister, Benito Mussolini.

His father, an avid U.S. stamp collector, encouraged his young son to begin collecting stamps from the Vatican.

“My father said, ‘it’s a new country, and you can start from the beginning,’” the retired Josephite Father recalled as he showed a visitor his large, remarkable and rare Vatican stamp collection that includes elaborately stamped envelopes (“covers” in philatelic terms) posted by the Vatican and flown all over the world on German zeppelins beginning in 1930 and later by early passenger aircraft.

Among them is a stamped letter from the Vatican to the U.S. carried by the Hindenburg a year to the day the huge Zeppelin burned and crashed in Lakehurst, N.J., on May 6, 1937 with the loss of 36 passengers and crew.

Under the Vatican’s 1929 concordat with Italy, Vatican airmail was dispatched from Rome’s Ciampino Airport. This gave the Vatican post office access to the zeppelin flights, and Vatican mail was serviced on German zeppelins between May 1930 and September 1939. Father Mullowney’s collection contains at least one flown “cover” (envelope) from every zeppelin flight that carried Vatican mail, including examples of Vatican City single, double, and triple franking markings, with the stamps of Italy and Germany.

Impressive as those particular collections are, Father Mullowney, now a resident and former rector of the Josephite’s St. Joseph Manor retirement home in Baltimore has much more. For example he has all the German stamps from the 1866 establishment of the North German Federation to the end of Hitler’s Third Reich in 1945. And then there are the many picturesque Egyptian postage stamps issued up until the death of King Farouk in 1965. And that’s not to mention all the stamps of the German colonies prior to World War I.

But, his pride and joy are the Vatican stamps. Yet, while they are popular with collectors, only an intrepid few have sought out their forerunners, the postal emissions of the so-called Roman States.

Father Mullowney is one of the few, and has amassed what is considered to be one of the finest such collections in the world. He noted that these 150-year-old stamps have been neglected for too long in this country and that they represent a brand new area of expansion for those interested in Vatican stamps or in religious themes.

Philatelist extraordinaire, Father Mullowney is not about to give up collecting. He is always on the lookout for a new addition to his collection, and when he spots something that piques his interest he contacts his auction agent who bids on it for him.

“It’s been more than a life-long hobby, it’s been and still is a passion,” said Father Mullowney, who is a past president of the Baltimore Philatelic Society and serves on the expertise committee for the American Philatelic Society.

“You know,” he said, “there has been more literature written about stamp collecting than any other hobby. That should tell you something.”