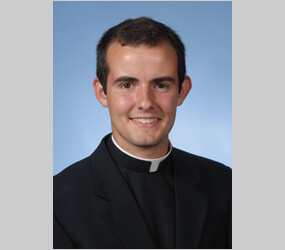 Joseph Gill was only 16 when he was accepted into the archdiocesan priesthood formation program as one of the youngest candidates in recent memory. After eight years of study, prayer and pastoral work, he will take one of the final steps in his journey toward priesthood when Archbishop Edwin F. O’Brien ordains him a transitional deacon May 23 at the Cathedral of Mary Our Queen in Homeland.

Gill will be ordained to the priesthood one year later.

“I want to make that commitment to be totally Christ’s forever,” said Gill, a 25-year-old parishioner of St. Peter the Apostle in Libertytown. “I’m excited to take those promises to belong totally to him.”

Participating in weekly adoration of the Blessed Sacrament was a “big influence” on his decision to enter the religious life, Gill said.

“My parish started perpetual adoration when I was in high school and through the experience of that and the experience of prayer and the witness of my family growing in their faith, I discerned that the Lord was calling to give him everything,” he said.

A musician who has recorded two Christian albums, Gill said music also played a role in his discernment.

“Listening to Christian music sparked my conversion,” he said. “It really helped me foster a personal friendship with Christ.”

Gill attended St. John’s Catholic Prep in Frederick before being homeschooled by his family. He majored in philosophy at Franciscan University in Steubenville. He has studied for the priesthood at Mount St. Mary’s Seminary in Emmitsburg and the North American College in Rome.

“It was a great blessing walking in the footsteps of the saints and living so close to the Holy Father in Rome,” Gill said, noting that one of the highlights of his year in the Eternal City was serving as a lector at one of Pope Benedict XVI’s Masses at St. Peter’s Basilica.

Gill has served the last two years at St. John the Evangelist in Severna Park and has been assigned to minister at St. Timothy in Walkersville after his ordination to the transitional diaconate.

While at St. John, Gill was active in reaching out to young people, and he hopes to continue that in Walkersville.

“St. Timothy has a very good Lifeteen program, and I’m there to help out in any way I can just to be an example of a young person on fire with the faith,” he said.