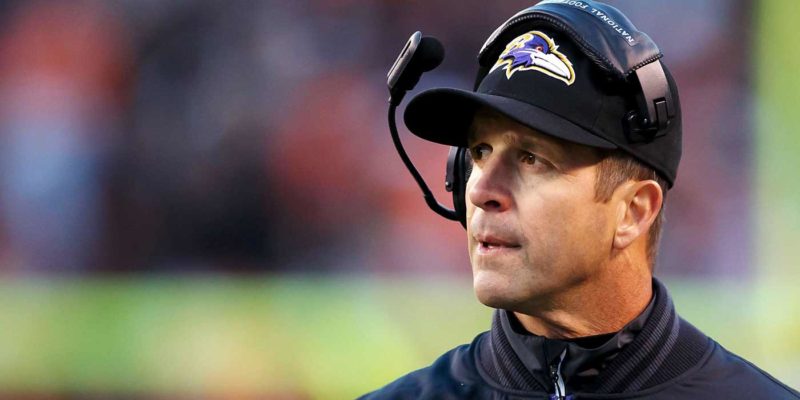 LINTHICUM HEIGHTS – Speaking to about 1,100 Catholic men at St. Philip Neri Parish, Ravens’ coach John Harbaugh made mention of his team’s hard-fought wins and miraculous plays leading up to a Super Bowl victory that capped the 2012 season, but he focused just as much on a 5-11 season in 2015.

As the season began, he distributed T-shirts to his players, emblazoned with a slogan: “Get comfortable being uncomfortable.”

“If I had known how uncomfortable God was going to make the season, maybe I wouldn’t have made the shirt,” he quipped at the sold-out 2016 Catholic Men’s Fellowship of Maryland Annual Conference March 5.

The Ravens’ record notwithstanding, Harbaugh commended his team because “week after week, day after day, they worked, they competed, and they never cracked.”

“That’s what faith is,” he said. “We choose hope or hopeless. We work together or alone. We turn our face humbly to our God, or we turn our back. We are all in or we are all out.”

Charlie Hawkins, president of the Catholic Men’s Fellowship of Maryland, noted that participation was up this year across the board. While previous conferences had not exceeded approximately 800, the 1,100 available slots were sold out this year by Feb. 29.

Harbaugh’s presence likely had something to do with that.

Hawkins also attributed the spike in attendance to a social media push and increased outreach to the Hispanic and African-American communities. Two speakers offered break-out presentations in Spanish, and there were 100 headsets available for simultaneous translation of the main speakers.

The final speaker, Deacon Larry Oney, author of “Amazing Grace Overcoming Race,” grew up the son of a sharecropper in rural Louisiana.

“I didn’t like white people, like many of you are here today,” he said as the crowd roared with laughter. “I feel better about white people today – God does amazing things.”

Deacon Oney spoke about the importance of men acting as strong spiritual fathers for their families.

“Brothers, did you know we are in a battle right now?” he said, noting the breakdown of the family and rise of moral relativism. “We call evil good and good evil. We live in a time when there’s shaking upon the earth. God is calling every man to stand up and do something. The first thing to do is to praise God.”

Like Deacon Oney, Father Larry Richards, a priest of the Diocese of Erie, Pa., and a sought-after speaker and author, exhorted men to protect their wives and children.

“You need to be this man of prayer that makes the world, the flesh and the devil tremble,” he said. “You look at the devil, and you say, ‘You’ve got to get through me to get to my wife and kids.’ “

Both Father Richards and Deacon Oney spoke of mercy.

“Mercy, gentleman, is giving something good to someone who doesn’t deserve it,” Father Richards said. “Who’s that? Every single person here.”

In his homily during the closing Mass, Baltimore Archbishop William E. Lori noted that the idea of mercy may not seem masculine to some men. They may see it as a plea to “please stop” to a person stronger than them, holding them in a half-nelson.

“I hope that’s not your idea of asking for God’s mercy, and I hope it’s not mine,” the archbishop said.

He noted that Pope Francis had called God’s capacity to forgive the “biggest proof” of his power.

“When we’re asking for mercy, we’re tapping into the greatest power of all,” Archbishop Lori said.

Jim Hamilton noted that his parish, St. Joseph in Fullerton, which sent about 30 men to the annual conference, follows Harbaugh’s lead and takes a team-oriented approach to faith. Six years ago, he and a couple other men decided to form a men’s group after meeting at daily Mass.

“A few of us got to talking afterward,” remembered Hamilton, a 48-year-old self-employed accountant. “If we had three men sitting outside talking afterward, then that was probably about half the men at daily Mass.”

One of those men, Doug Brown, a 54-year-old career-coach, remembered that an older man threw him a CD from the Lighthouse Catholic Media kiosk in the church foyer, and then nodded toward Hamilton and said, “You guys are around the same age; you should talk.”

They did, and the idea of starting a men’s group evolved.

“I’d always felt we should have more of a presence at St. Joseph’s,” Brown said.

Hamilton went to his pastor, Monsignor Kevin T. Schenning, to run the idea by him, but the priest beat him to it, saying, “We need to start a men’s group.”

“The Holy Spirit was working through these guys,” Hamilton said. “I couldn’t ignore that.”

Hamilton and Brown formed a small group and connected it to the Men of St. Joseph, an international Catholic association that encourages men to meet for weekly prayer, with the goal of serving as effective spiritual leaders of their families.

“The network was there,” Brown said. “They gave us a lot of coaching and information to get started.”

The group – which includes parishioners from St. Joseph, St. Ursula in Parkville and St. Isaac Jogues in Carney, meets Tuesdays at 6 a.m. and takes a Saturday 2 a.m. shift for perpetual Eucharistic adoration at the Church of the Immaculate Conception in Towson.

Taking the call to evangelize seriously, the Men of St. Joseph spoke after Masses as Lent began, offering free tickets to the annual conference, a highlight for members.

“I discovered it four years ago, and I’ve been to every one since,” said Pat Reid, another member of the Men of St. Joseph. “Last year my wife was trying to organize a trip to go to Arkansas to see our daughter, and I said, ‘No no – not that weekend.’”