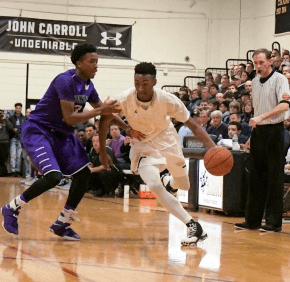 By Paul McMullen
pmcmullen@CatholicReview.org
Twitter: @ReviewMcMullen
BEL AIR – College basketball coaches such as Kentucky’s John Calipari, Miami’s Jim Larranaga and Virginia’s Tony Bennett were in the house, but latecomers were left out in the cold at John Carroll Jan. 16, for a visit from Mount St. Joseph in a rematch of the 2016 Baltimore Catholic League tournament final.

Coach Pat Clatchey’s Gaels posted a 77-71 victory in a packed, sold-out gym over a depleted Patriot team that had beat them at the buzzer last February on a three-pointer by Immanuel Quickley.

Clatchey said that result was not mentioned in his team’s preparation, but acknowledged that it “stuck in my craw.”

Quickley, co-BCL Player of the Year as a sophomore, and Mount St. Joe big man Jalen Smith are among the nation’s premier juniors who have not selected a college. Smith led the Gaels with 24 points, and senior Darryl Morsell, who has accepted a scholarship to play at the University of Maryland, had 19.

Sophomore James Bishop had 18 and senior Jaden Robinson had 15 for Mount St. Joseph, which wore down John Carroll. The Gaels had few misses in the first quarter, when they took a 29-21 lead, but needed a 10-0 run in the fourth quarter that featured a baseline drive and dunk by the 6-foot-9-inch Smith, who carries a 3.7 grade point average in the classroom.

Committed to the University of Maryland in the fall, Mount St. Joseph High School senior Darryl Morsell looks to score against John Carroll’s Immanuel Quickly and Cameron Byers during an afternoon game in Bel Air Jan. 15. The Gaels went on to beat the Patriots 77-71 in a road victory. (Kevin J. Parks | CR Staff)
Quickley earned all of his game-high 25 points, as Clatchey rotated the assignment of defending him among junior Tyree Meyers, Morsell and Robinson, limiting him to just two field goals in the second half. Quickley was without running mate Montez Mathis, who missed the game with an illness.

Mount St. Joe improved to 20-1 overall, its only loss coming at St. Maria Goretti. The depth of the BCL is such that St. Frances Academy has a losing overall record, but beat one of the top teams in Chicago Jan. 14.

Among the coaches keeping tabs on their elite recruits, Calipari coached Kentucky to the 2012 NCAA championship, and Larranaga got upstart George Mason to the 2006 Final Four behind Will Thomas, a Mount St. Joe product.