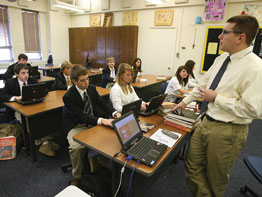 The John Carroll School in Bel Air has no plans of expanding its enrollment beyond the level it has maintained in recent years. Following a six-month study to determine its ideal size, school leaders decided to keep enrollment within the 800-900 range, according to a Jan. 28 announcement. There are currently 860 students at the coeducational high school.

“Overwhelmingly, that was the preferred option among current staff, parents and other constituents,” said Richard J. O’Hara, president. He noted that the board of trustees unanimously voted to accept a study group’s recommendation to maintain existing enrollment levels.

There are numerous benefits to John Carroll’s current size, Mr. O’Hara said. The school is small enough to foster a good sense of community and good relationships between students and teachers, he said. It’s large enough to offer numerous extracurricular and sports activities.

The school is now formulating a master plan for major capital improvements to facilities that may include the construction of a new building, Mr. O’Hara said. Working with the board of trustees’ strategic planning committee, the administration will also conduct a study of future curriculum and teaching methods that will best serve students, he said.

“Our goal is to have, by sometime this summer, a facilities master plan that supports those educational objectives,” Mr. O’Hara said.

Although many families are expected to relocate to Harford County as a result of the upcoming military base realignment and closure initiative (BRAC), the number of students expected to enroll at John Carroll is not projected to be as high as initially thought. Based on an analysis of BRAC, newspaper reports and interviews with military representatives, John Carroll estimates that only about 80 relocated students will enroll at the school – slightly less than 10 percent of current enrollment.

“It’s like getting another feeder 8th grade,” said Mr. O’Hara.

Not factoring in the BRAC relocations, the president pointed out that demographic trends in Harford County are moving slightly downward. There are an estimated 11,216 students in the Harford County public schools projected for the current school year, he said. That number is expected to decline to about 10,800 in the 2010-11 school year.

“It’s not earth shattering, but it is a decrease,” he said.

The John Carroll study group analyzed data obtained through surveys of parents, students, alumni, past parents, faculty and staff, according to board chair Thomas E. Kelso.