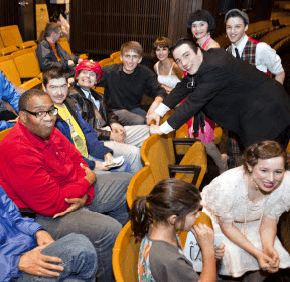 TIMONIUM – Gallagher Services clients in Harford County think of The John Carroll School in Bel Air as “their school,” and with good reason. Students frequently include them in school activities, from homecoming to holiday parties.

The relationship is rooted in the school’s Friend to Friend program, which builds relationships between students and people with intellectual disabilities served by the Timonium-based Catholic Charities of Baltimore program.

Over time, the “them” and “us” became a “we” for program participants, said John Carroll alumnus Nick Henninger, who launched the program in 2011 as part of his senior-year service requirement.

Now in its second year, its leaders hope it will have staying power.

A parishioner of St. John the Evangelist, Hydes, Henninger began volunteering at a Gallagher Services residence with his older brother, Joe, in 2009.

“I was amazed by all the things they could do and teach me,” he said. “Even though I was volunteering, I felt like it was as if they were volunteering for me.”

In starting John Carroll’s Friend to Friend program, Henninger hoped to help other students let go of similar “burdens” by bringing Gallagher residents to campus – a familiar place for students and a fun place for those served by Gallagher.

A similar program at Maryvale Preparatory School in Brooklandville gave him confidence that it could work. He inspired more than 50 students to host social activities including a Valentine’s Day party, basketball game and a trip to the Baltimore Zoo.

“It’s opened a social, cultural gathering place for our folks,” said Kathleen Roberts, Gallagher Services’ spiritual development coordinator. “I don’t know where else these individuals would have a chance to see plays or to dance with high school students, or to sit with them at a football game.”

When he graduated, Henninger passed the Friend to Friend’s leadership to Ashley Beyer, a John Carroll senior and parishioner of St. Stephen, Bradshaw.

Now an official school club, Friend to Friend has been a “blessing” for her, she said, recalling a time when a Gallagher resident told her he had been praying for her.

“That was one of the most amazing things. I didn’t expect it at all,” she said. “They’ve given so much to us and all of the students. It’s been so amazing.”

A freshman at the University of Maryland College Park, Henninger keeps in touch with people from Gallagher Services, especially 33-year-old resident John Levas, who has become a good friend. He recently returned to John Carroll to spend time with them while watching a performance of “Singin’ in the Rain” that included Beyer.

Henninger expects Friend to Friend to grow because of students’ enthusiasm and commitment, even while juggling several extracurricular activities, as he and Beyer have.

“What it comes down to is that every life is beautiful, and that there is no exception to that rule,” said Henninger, who also headed John Carroll’s pro-life club. “No matter what your condition, everybody has such a beautiful thing to add to the community … and we all need to be attentive to the things that other people can bring.”