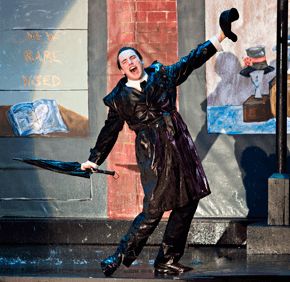 BEL AIR – After four nights of shows filled with singing, dancing, flapper-era costumes, a live pit orchestra and even on-stage rainfall, The John Carroll School’s theater department closed its production of “Singin’ in the Rain” with one last matinee performance Nov. 4.

During their performance of the silver-screen classic, Thomas P. Gardner, Brady Fritz, Karly Horn and Lindsey McCumber elicited rounds of applause and guffaws in their roles as Don Lockwood, Cosmo Brown, Kathy Seldon and Lina Lamont.

One of the more memorable moments came to close the first act when Gardener, in the role played originally by Hollywood’s Gene Kelly, splashed his way through puddles caused by an on-stage downpour. It was a playful interpretation of the show’s title number.