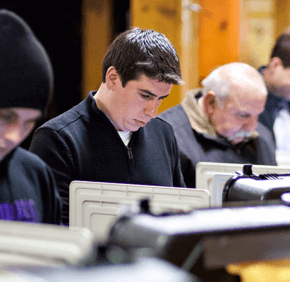 As President Barack Obama was re-elected to a second term, Maryland voters chose to affirm the state’s DREAM Act as well as same-sex marriage during Election Day Nov. 6.

Same-sex marriage passed with a close margin of 51.9 percent for and 48.1 percent against the law, according to results from the Maryland State Board of Elections posted by 6 a.m. Nov. 7.

The Maryland State Board of Elections showed that the DREAM Act had garnered more than 57 percent of the state’s popular vote by midnight on election day, and by 6 a.m. those results had risen to 58.3 percent for and 41.7 against.  The DREAM Act will allow individuals, including undocumented immigrants who meet certain criteria, to pay in-state tuition rates at Maryland public colleges and universities.

Gov. Martin J. O’Malley praised the DREAM Act’s passage, stating, “Marylanders – guided by our belief in the dignity of every individual – have chosen to make the dream of a college education a reality for every child. In order to expand opportunity, we’ve chosen to hold down the costs of college tuition for Maryland families more than any other state.”

On election night, the public vote leaned in favor of affirming the state’s same-sex marriage law by 51.3 percent to 48.7 percent by midnight Nov. 7.

Maine, Washington State and Minnesota also voted on the definition of marriage Nov. 6.  Major news outlets were reporting that initial returns showed each state was poised to give same-sex couples the right to marry, making the first time marriage rights have been extended to same-sex couples by popular vote.

Speaking from his campaign headquarters in Chicago, President Obama said he has “never been more hopeful about our future.”