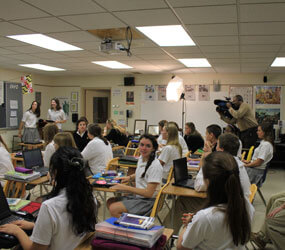 Bel Air – The John Carroll School’s student newspaper, The Patriot, might just be a breeding ground for some successful future journalists – that is, if its 2010-2011 awards list is any indication.

The Patriot’s moderator, Mark Ionescu, attributes the paper’s success to the “drive of the students who have put endless amounts of time and energy into the paper.”

Jenny Hottle, 2010-2011 online editor, explained the paper submits applications throughout the year for press awards through each of these organizations.

One of the perks of these memberships is “students get to look at other student papers and see what they’re doing,” said Ionescu, who was himself a finalist this past year for Youth Journalism International’s Journalism Educator of the Year.

Among other awards, The Patriot received the CSPA Online Gold Crown in addition to an All-American Honor Rating from the NSPA. The latter award noted “four marks of distinction, out of a possible five, recognizing exceptional achievement in the areas of Coverage/Content, Writing/Editing, Photos/Art/Graphics, and Layout/Design.”

“Last year, we had a really good staff. We were very professional together,” said Hottle, who added that the staff’s being good friends also helped in the paper’s success.

The paper has been online now for two years. “The online component grew this paper in a different way than it has in the past,” said Ionescu. “We always relied on a six-paper print schedule. The addition of online really enabled the students to cover things as a journalist would.”

Through the online edition, for instance, The Patriot was able to keep the student body and parents informed about tornado warnings as they were happening at the end of the school year, said Hottle.

“We are a tablet laptop school, so all students have computers they carry around all the time,” Ionescu explained, “(The paper sends) an email to the student body once a week with the top headlines.”

Ionescu said through the paper’s online component, it has “quadrupled its amount of content in a year.”

“We kind of didn’t really hold ourselves back at all,” Hottle said. “We tried to cover what students cared about.”

A senior this past school year at John Carroll, Hottle said her two years working on The Patriot “helped me narrow down my career decision”; she will attend University of Maryland, College Park, in the fall as a journalism major.

In the meantime, The Patriot will move on campus this coming year to a space the size of two classrooms, Ionescu said. The paper, which once staffed as many as 15 students, now has a staff in the upper 20s to 30s.

“We’ll be able to fit everybody in the same room for the first time in a few years,” said the moderator, explaining the staff’s growth has caused it to be split into two classrooms for some time now, making communication among editors and reporters interesting to finagle.

Upcoming online editor-in-chief Grace Kim described the new room as “huge” and said the move will allow the staff to “now be one big unit.”

Kim, who will be a senior this coming school year, said she is excited looking at next year’s staff list, recognizing the names of a slew of dedicated individuals. She said the online paper will receive a little revamping and explained that she and “Mr. I” and print editor-in-chief Maggie Cassidy “are meeting a few times over the summer and talking about next year.”