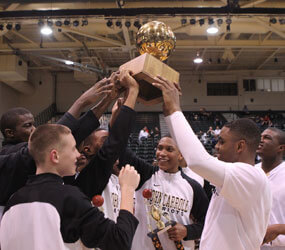 John Carroll boys’ basketball coach Tony Martin had one goal when he joined the Bel Air school in 2005: get his team into the prestigious Baltimore Catholic League.

Martin believed that once his team got a foot in the door, the Patriots could alter Baltimore’s basketball power structure.

Seven months ago, Martin finally succeeded in lobbying to join the BCL, along with Our Lady of Mount Carmel. On March 1, members of the John Carroll team were holding up the league tournament trophy after beating perennial power St. Frances Academy, 57-45, at Loyola University Maryland’s Reitz Arena.

“It’s surreal,” Martin said. “Malcolm walked over to me and said, ‘Coach, relax, enjoy it.’ I’m really happy for the kids, that is for sure. Obviously, we’re humbled with the success we’ve had.”

Martin pulled McMillan close during their embrace and had a simple message to the senior, who is bound for Central Connecticut University.

“I told him that I love him,” Martin said.

“I just thanked coach,” said McMillan. “I don’t know if I’d be here without him.”

McMillan, who shared BCL Player of the Year honors with St. Frances’ R.J. Williams, and fellow Patriot senior Ronald Scott were asked to buy into Martin’s program four years ago, when it was trying to earn respect.

“I got to know coach real well and just trusted him,” McMillan said. “I could see he was trying to turn John Carroll around and that’s what he did.”

Martin, who led Archbishop Spalding to basketball prominence in the 1990s, took over a John Carroll program that was winless during the 2004-05 season. The school’s coordinator of outreach and service, he met with families of potential players, telling them that sacrifices for success would be made.

“You have to have a plan and follow through,” Martin said. “I told them that if they came there, they were going to get an academic education and an opportunity to play at the highest level. Colleges were going to take a look at them as real student athletes.”

On the court, Martin told players to buckle up.

“He told us we were going to work hard all the time, no matter what,” Scott said.

The program went through growing pains.

“The pivotal moment was winning six out of our last eight games last year,” Martin said. “We had graduated eight seniors (in 2009), our best player tore his ACL (anterior cruciate ligament) and then we lost two transfers who ended up being good players. We were decimated and there could have been people who jumped ship, but we galvanized, finished fourth in the league and went to the semifinals of the MIAA.”

McMillian said the team had to mature this season.

“We went through a lot,” the guard said. “Great players transferred in, great players left. We finally got our stuff together and worked it out.”

By winning the BCL tournament this year, the Patriots have clinched a spot in the Alhambra Catholic Invitational Tournament in Cumberland. They’ll make their debut in a tournament that features some of the nation’s best Catholic high school teams March 17-19, at Frostburg State University.

St. Frances Academy was among the teams receiving invitations to the event.

“We’re putting ourselves up against the best,” John Carroll’s McMillan said. “Nobody’s going to believe in us. We’ve just got ourselves.”