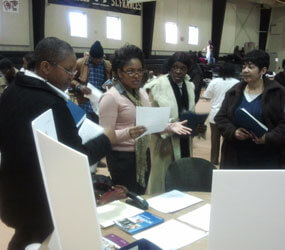 While some took time to relax from their job as the country celebrated the birth of one its most influential civil rights leaders, others not afforded that luxury used the day to try and change their employment status.

“We want to associate Martin Luther King Jr.’s birthday with helping folk,” said Ralph E. Moore Jr., director of the community center, on the rationale behind the annual event. “A lot of people forget or don’t realize that the March on Washington was actually themed on jobs. We want to connect Martin Luther King Jr. with economic development and creating jobs.”

A free breakfast and lunch was provided for those in attendance at the East Baltimore location. There were also guest speakers who provided motivation and encouraging words for job seekers.

Michael Parker, a recruiter and career specialist with the University of Maryland, said job fairs are goldmines for finding talent.

“We want to be the employer of choice for the Baltimore area,” Parker said. “This is the best place to find those who want to work and have a strong desire to work. Sometimes you have to go into the community to find those people.”

While there is never a lack of able bodies at the job fairs he attends, Parker said it is sometimes difficult finding qualified workers with specific job sets for the hospital’s openings.

“Finding people who know what they actually want to do is a challenge sometimes,” he said. “The economy has given us a pool of people who want to work, but it’s also given us people who are desperate and simply want any job. That’s not always best in the health care field.”

Other obstacles for finding workers include job candidates not having sufficient education or education level, and being able to pass a criminal background checks. Myer Wise, a human resource specialist with Canteen Food Services, said for every 100 applicants, only about 20-35 actually pass the background check.

Those in attendance seeking employment had mixed reactions about the job fair. While all did their best to take advantage of the job fair, some job seekers, like Kyya Brown, were disappointed that no on the spot interviews were conducted; they were further dismayed when some of the employers present informed them that they were not accepting résumés.

“There wasn’t really much I could get from some of the companies here since there weren’t any actual interviews or anything like that taking place,” Brown said.

Others, such as Janelle Lloyd, seemed to fare better. Beaming with optimism when her résumés were accepted, Lloyd said she fancied the face-to-face meetings provided at the job fair.

“A lot of people need employment,” Brown said. “We all go online and do research, but there’s not a person you can speak to that way. Coming here made me feel a lot more hopeful about finding a job.”