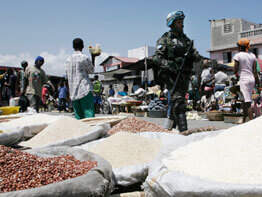 PORT-AU-PRINCE, Haiti – Haiti’s bishops and a group of Jesuits in the country called on the government to put in place short- and medium-term plans to address the hunger crisis driven by a hike in world food staples.

In an April 12 statement, the Jesuits also urged the international community to “keep its promises and help the country rise out of the quagmire it has sunk into.”

Describing themselves as “deeply united with this suffering people and sincerely in solidarity with the victims,” the priests urged Haitian President Rene Preval to carry out an in-depth reform of public institutions to allow development.

They also called on parliament to put in place a plan to provide relief to people who cannot afford to buy the food they need to survive.

The same day, Haiti’s bishops also expressed their compassion for the poor and offered solidarity to the families of victims of violent unrest.

“The bishops’ conference condemns violence, whatever its form, because violence brings conflict and it can in no way resolve our problems,” they said in the statement.

The statement, signed by Bishop Louis Kebreau of Hinche, president of the bishops’ conference, reminded Haitians that “if the right to demonstrate is sacred, this does not authorize anyone to take lives or attack property belonging to others. Those responsible for public order must protect lives and property and punish those who break the law.”

The bishops said peaceful and legitimate demonstrations should not be infiltrated by “agitators and interested manipulators” who provoke acts of vandalism.

Expressing their outrage at the manipulation of minors who participated in protests, the bishops called on parents, educators and community leaders to promote “a real citizens’ education that allows these young people to become honest citizens who respect their national and cultural heritage.”

“The hour for division and exclusion has long passed,” they said. “It is time to ask ourselves the question: What is the commitment that we as citizens wish to take regarding our nation in danger to establish a climate of peace and serenity, in a new spirit of trust, solidarity and mutual respect?”

Since former President Jean-Bertrand Aristide’s departure from Haiti in 2004, the price of rice and beans has nearly doubled and, in the last six months, these staples have risen by more than 30 percent. Mr. Preval, an agronomist, initially refused to allow government subsidies on imported rice, which today feeds most Haitians, saying that he would only subsidize national rice production.

Mr. Preval announced April 12 that his government would provide significant subsidies for fertilizer. Under sustained pressure, the president also finally announced that he had reached an agreement with rice importers, that they will reduce for one month the price of rice by $3 per sack. The government will in turn subsidize rice by $5 per sack, bringing the price down to $43 per sack.

The food crisis and ensuing widespread riots in early April brought a Senate vote of no-confidence against Prime Minister Jacques Edouard Alexis, who stepped down April 12, as Mr. Preval negotiated with rice importers.

Many Haitian analysts had suggested that unrest over high food prices had been hijacked by certain political sectors who sought to use the situation to advance their own political interests, including attempting to topple the government.

Some speculated that part of the business sector, including rice importers, were opposed to government policies to encourage national production rather than import foodstuffs, and wished to capitalize on a popular demand for cheaper food. Others speculated that Mr. Aristide’s political party, seeking to make a comeback, also had tried to use the unrest for its own ends.