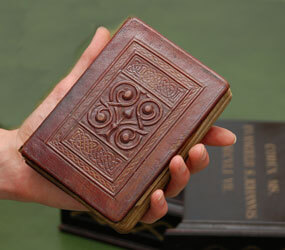 LONDON – The Jesuits have sold the historic St. Cuthbert Gospel – believed the oldest intact book produced in Europe – to the British Library for $14.7 million.

The British Province of the Society of Jesus agreed to sell the late 7th-century Anglo-Saxon manuscript to raise funds to restore a historic church and pay for educational work in London and Glasgow, Scotland.

The book, a pocket-size Latin translation of the Gospel of St. John, was found inside the coffin of St. Cuthbert, bishop of Lindisfarne, when the saint’s grave was opened in 1104.

Experts believe the manuscript was placed inside the casket within 10 years of the hermit’s death in 687.

Jesuit Father Kevin Fox, spokesman for the British Province of the Society of Jesus, announced the sale of the Gospel in a statement in July.

“It has been our privilege to possess this book for nearly 250 years,” he said. “Now, in order to answer more of the many demands on our resources, the province trustees have decided to sell.”

He said that the British Library would ensure that the manuscript was available for people from around the world to view either directly or online.

“People will be able to see the Gospel set among the library’s other treasures of the Christian faith and of Anglo-Saxon and Celtic art,” Father Fox said.

The statement said that the Gospel was, produced by monks of Wearmouth-Jarrow in northeast England.

Funds from the sale, concluded in conjunction with the auction house Christie’s, will be used to help fund Jesuit schools in London and Glasgow, Scotland, pay for a new school to be founded in Africa and pay for the restoration of the 19th century Church of St. Peter, Stonyhurst, the parish that serves Stonyhurst College in Lancashire, England.

The St. Cuthbert Gospel was described by the British Library in a July press statement as having “beautifully-worked original red leather binding in excellent condition.” The library said it is “the only surviving high-status manuscript from this crucial period in British history to retain its original appearance, both inside and out.”

The Gospel was buried alongside St. Cuthbert following his death on the island of Lindisfarne off the northeast coast of England. His coffin was transferred to nearby Durham as his community attempted to escape coastal Viking raids. His grave later became a pilgrimage site.

The Gospel was discovered when St. Cutherbert’s coffin was opened 400 years after his death during the dedication of a shrine in his honor at Durham Cathedral.

It was kept in the cathedral priory but when King Henry VIII dissolved the monasteries during the Protestant Reformation the Gospel passed into the hands of a private collector in 1540.

By the 18th century, the book was in the possession of the 3rd Earl of Lichfield who gave it to Canon Thomas Phillips, who in turn presented it in 1769 to the Jesuits.

The book has been on loan to the British Library since 1979. It often was displayed in the Sir John Riblat Gallery.

The Jesuits approached the library in 2010 with an offer of the first option to acquire the Gospel for the public.