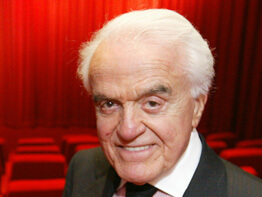 WASHINGTON – Jack Valenti, who had overseen the Motion Picture Association of America for almost four decades, was remembered fondly after his April 26 death for his diligence in alerting parents to the content of movies and television programs their children might want to see.

Mr. Valenti, a Catholic, died in Washington at his home from complications of a stroke he suffered in March. He was 85 years old. No funeral details were immediately released.

“Valenti’s triumph in simultaneously broadening the subject matter of American films – some abuses of that new freedom notwithstanding – while also protecting children from this more permissive material was remarkable indeed,” said Harry Forbes, director of the U.S. bishops’ Office for Film & Broadcasting.

A decorated World War II combat pilot who began handling advertising campaigns for political candidates in the 1950s, Mr. Valenti went to work at the White House as a special assistant to President Lyndon Johnson in 1963.
He had met Johnson when he was Senate majority leader in 1956.

In 1966, Mr. Valenti took the helm of the MPAA, where he marshaled a disparate group of Hollywood studio executives into one of the most respected lobbies in Washington – in part due to his insistence on having a ratings system to guide parents as to whether children could see heavily promoted new movies without undermining the values the parents were trying to instill.

In an interview with CNS before his September 2004 retirement as MPAA head, Mr. Valenti said the concept of ratings was “to put the authority of which kid goes to which movie in the hands of parents, and not anyone else, because parents are responsible for the behavior of their children, not the government. I think the school and the church have a lot to do with that, but in the end parents make that decision.”

Mr. Forbes said, “Valenti came to the film industry at a critical time when foreign films were handling adult subject matter more openly than Hollywood, and the studios were facing declining audiences. He realized that if the studios were to compete they would have to protect audiences by means of the same sort of classification systems as were in place elsewhere in the world.”

“He was also prescient enough to realize the importance of utilizing the religious community in persuading studio heads to accept such a system which, to their minds, might limit their audience still further,” he said. “The Catholic Film Office (precursor to the Office for Film & Broadcasting) had, in fact, long wanted Hollywood to institute such a system.”

The Office for Film & Broadcasting, which has had a movie classification system in place for more than 70 years, is still invited to view films recut by their directors in hopes of acquiring a more acceptable rating.
Representatives of the office do not participate in the ratings appeals.
“We felt free to comment on the work of the CARA – the (MPAA’s) Classification and Rating Administration – which we played some part in advising him (on) when it was first set up,” recalled Monsignor Francis J. Maniscalco, former secretary of communications for the U.S. bishops and now director of the Respect Life Office for the Diocese of Rockville Centre, N.Y., his home diocese.

It was very important to Mr. Valenti to see “what the church’s feeling was about the ratings, and getting our reactions and seeing if there were changes needed in the system,” Monsignor Maniscalco added.

Monsignor Maniscalco said Mr. Valenti “played an important part in Cardinal (William H.) Keeler’s interest in contacting Hollywood leaders, which he did for several years both during and after his presidency” of the U.S. bishops’ conference. Cardinal Keeler of Baltimore was president in 1992-95.

“He was very instrumental in arranging several meetings (for Cardinal Keeler) with executives in the industry – and that went on for about six years,” the priest told CNS.

Over the decades, the MPAA ratings were tweaked: The M (mature) became GP and later the current PG (parental guidance), with a PG-13 rating added to further differentiate films according to their content. And, after pornography purveyors claimed the X rating for their own, the NC-17 rating was established to prevent minors from seeing films with explicit sexual content.

Mr. Valenti also lent his expertise to the television industry in the late 1990s when congressional clamor over TV content led to the creation of the TV Parental Guidelines; the V-chip installed in virtually all new TV sets built this decade allow for programs with certain classifications to be blocked from viewing.