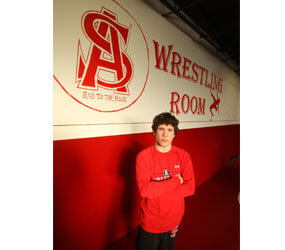 SEVERN – In addition to the requisite athleticism and desire, Charlie Lynch applies scientific technique to his wrestling.

A senior at Archbishop Spalding High School, Lynch is a reigning Maryland Interscholastic Athletic Association champion and one of the main reasons behind the Cavaliers’ meteoric rise to the top of local team rankings.

Come fall, the 145-pounder will take his talent to the University of Pennsylvania in Philadelphia, where he’ll compete for an Eastern power and continue the schoolwork that he expects will take him to medical school, where he’d like to become an anesthesiologist.

“Knowledge of anatomy and physiology help me understand how the body burns fat and needs energy,” Lynch said. “Even when you’re not working out, the more muscle tone you have, the more calories you burn.”

His mother, Doris, helps on the nutrition front.

“I did not grow up on junk food,” Lynch said. “My friends laugh, because there is no junk food in the house. Snacks are grapes, fruit.”

Proper nourishment is a major concern in an endeavor that is not restricted to the winter season.

“The wrestling season never really ends,” Lynch said. “You take a few weeks off in the summer, but you train and compete through the spring, fall and winter.”

Wrestling primarily in the 145-pound division, Lynch is unbeaten this season. His training partners include friends, such as Will Switzer (140) and Cole Graves (130). Under coach Mike Laidley, they’re at the core of a lineup that has made the Cavaliers No. 1 in a sport in which they barely had an identity a decade ago.

“We have a tough room,” Lynch said. “Our coaches teach us great technique. Every guy wants to be the best. When you have that happening, you’re going to have a good team. There’s not a single guy training for second place.”

Lynch transferred from Mount St. Joseph to Spalding as a freshman. He was an MIAA runnerup as a sophomore, and last year ruled the 135-pound weight class. This season, he’s won tournaments in Virginia and on the Eastern Shore.

The summer of 2009 took him across the Delaware River from Philadelphia, to Camden, N.J., with a Spalding outreach.

“We volunteered in nursing homes, and lived on the same money the residents did,” Lynch said. “You saw how different their lives were. It was a great experience.”