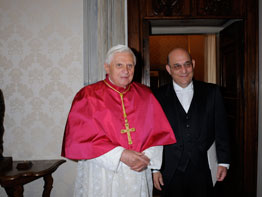 ROME – Israeli ambassadors to the Vatican have a tradition of being press-friendly, and Mordechay Lewy is no exception.

Three days after presenting his credentials to Pope Benedict XVI, Ambassador Lewy sat down with six Vatican journalists for a conversation at the Israeli Embassy in Rome’s Parioli neighborhood.

Over coffee and cookies May 15 he chatted about his new job and did a little parsing of the pope’s speech, which was handed to him at the credentials ceremony.

Ambassador Lewy left no doubt that he relishes the role of ambassador to the Holy See. He said that when diplomatic relations between the Vatican and Israel were established in 1993 he told himself, “That’s a job for me.” He’s had a long interest in the history of religion in the Middle East.

Ambassador Lewy told reporters that his meeting with the pope was very positive, on the whole. Like any diplomat would, he carefully studied the pope’s speech and found much to his liking, particularly the pope’s emphasis on areas of mutual interest and historic connections.

The pope also spoke about the need to stop Christian emigration from the Holy Land, referring to the current insecurity and violence in the region. Here, the ambassador said he thought “a few more reasons could have been enumerated” to account for the massive Christian departure, which he noted began well before the state of Israel was established.

Ambassador Lewy said most of this emigration, past and present, has been for economic, not political, motives. Because Christians are often among the best-educated people in the Holy Land, they have greater access to employment elsewhere, he said.

“The church is a victim of its own success. They created a highly skilled professional middle class, and a main characteristic is mobilization, in order to find the best job possible,” he said.

That does not mean Israel does not feel a continued Christian presence in the Holy Land is not important, he said, but it’s hard to prevent Christians from seeking better opportunities outside the region.

“They are not obliged to lift the last candle in the Holy Land,” he said.

One church complaint in recent years has been a tightening of entry visas for church personnel working in Israeli territory. Ambassador Lewy said the stricter policy was the result of the many suicide bombings during the second intifada that began in 2000.

The ambassador said Eastern churches in the Holy Land often have personnel coming from countries like Syria, Iraq and Lebanon, so they are going to be carefully checked. Those whose job it is to protect the country view it simply as a security issue, he said.

“I see a clergyman. The security supervisor sees a Syrian,” he said.

When it was pointed out that Christians have not carried out suicide bombings, the ambassador recalled the case of Melkite Archbishop Hilarion Capucci, a Syrian prelate arrested by Israel in 1974 and charged with running guns for terrorists but freed under Vatican pressure.

“It was a long time ago, but this remains in the collective memory. It did a lot of harm,” Ambassador Lewy said.

The ambassador was asked about the on-again, off-again negotiations between the Vatican and Israel on fiscal and legal issues for church institutions in Israel. He said both sides know there has to be an agreement, but he didn’t promise a quick resolution.

“It’s mainly a domestic affair, but it does have repercussions on foreign affairs, including relations with the Holy See,” he said.

Ambassador Lewy said he did not come into his job with a “blueprint,” but predicted that his work would focus largely on bilateral issues and also on Catholic-Jewish relations.

Asked what his general approach would be, he stood and ran his hand over the rounded edge of his wooden desk and said, “I’m for smoothing things up and not for stressing the corners.”

As for whether Pope Benedict would make a visit to Israel, Ambassador Lewy said the pope was welcome to visit at any time. The ambassador didn’t sound too optimistic about it happening very soon, however, and he said he didn’t repeat the invitation when he met with the pope.

“I was not obliged to make a ritual of inviting him. He has an invitation, and there is no need to repeat it,” he said.

Ambassador Lewy said that as far as Vatican-Israeli relations are concerned he thinks it’s often better not to talk too loudly about grandiose projects and plans.

“It’s better to have low expectations, and then have good surprises,” he said.