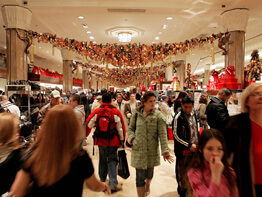 Our lengthy “holiday season” driven by the consumer-confidence index and lasting for months is a bad idea, writes Stephen Kent. It all adds up to a festival of consumerism, he believes; it wrings the true meaning out of Christmas. But Liz Quirin says that in her family Christmas shopping is a happy time of being together and having fun. Moreover, she finds that the current emphasis on parish gift-giving programs for the needy adds a positive note to family shopping at Christmas. The shopping doesn’t have to turn into a living, spending nightmare, Quirin says. She is editor of The Messenger, newspaper of the Diocese of Belleville, Ill. Kent, who writes from Seattle, Wash., has been editor of the archdiocesan newspapers of Seattle and Omaha, Neb.

Not if you make it a win-win situation

Materialists, unite! Certainly there’s more to Christmas than shopping, and yes, we’ve seen businesses pulling out their Christmas decorations along with their Halloween pumpkins. But the day after Thanksgiving provides more blessings than you might think.

It’s the biggest shopping day of the year. People gather families and friends together to make sure they have lists, sizes, store hours and a plan.

My friend Alice said that for many years she and her husband spent Thanksgiving in southern Missouri at his grandmother’s home. She not only looked forward to spending the holiday with his family, but shopping the day after Thanksgiving became a family tradition.

A group of women — relatives and friends — rose early, ate breakfast together, shopped until noon, ate lunch together, shopped until dinner time, ate dinner together and returned home about 10. Whew! Now that’s a lot of shopping, but during the day they talked, laughed, shared family stories, helped each other select gifts and had a wonderful time together.

Although years have passed and some of those relatives are no longer here, Alice still remembers those happy times spent together.

Even if I don’t or can’t shop quite as diligently as Alice, my daughter loves to go shopping the day after Thanksgiving. For a while I dreaded the day, thinking it would be awful with all those people snatching at sale items. I conjured horrible scenes of people squabbling over merchandise, jostling each other in lines that stretch into infinity, but it never turns out that way.

Often we have friendly conversations with other folks in line, and they may offer a bit of advice about another place to go or something else to see.

While people usually shop for their own families, many people shop for others they may not even know. Parishes and individuals sometimes “adopt” families for Christmas and, with help from someone who knows, shop for children and adults who can’t afford to buy gifts for themselves. It gives us one more reason to head to the stores. If we’re buying for an “adopted” family with our own children, they can see how important it is to share with others. This has to be a win-win situation.

Anybody can go too far in shopping for Christmas gifts. How many tubes of hand lotion can Grammie use in one year? But shopping doesn’t have to turn into a living, spending nightmare. If you receive gifts you don’t want, especially clothing items you wouldn’t wear to a yard sale, you could begin a new family tradition of “re-gifting.” Instead of making the day after Christmas a day to return half the items so carefully purchased the day after Thanksgiving, make it a day for re-gifting. Items for re-gifting could be placed under the tree a second time. Family members could take turns selecting something.

It could become another important day for families to share. If no one in the family chooses a gift under the re-gifting tree, it could be given to someone who might actually need it.

Not just a time for the greedy (generally assumed to be children who already have too much of everything), Christmas and shopping, this year and every year, can be a time to share love and laughter, gather families together and remember those in need.

Yes, it creates a festival of getting and having

Efforts to keep Christ in Christmas have been a losing battle for some time, perhaps lost in an era between Holly Hobby and Mutant Ninja Turtles.

Together with dilution of school Christmas programs, wringing any religious reference from carols, any vestige of the religious and spiritual has been eliminated from Christmas.

Have you yet to hear anyone complain this year — or even remark — about Christmas decorations in stores prior to Thanksgiving?

Not all that long ago premature displays were a common seasonal complaint. Now the absence of such complaints is a sign of acceptance of the transition from “Xmas” to the “holiday season.”

When the term “Xmas” first came into vogue, it was said to express secularism and spurred campaigns to “Keep Christ in Christmas.” Those efforts were all but overwhelmed by the advertising and marketing blitz. What happens in December is not about Jesus anymore.

Eliminating the religious nature of Christmas and Hanukkah, substituting “holidays” for holy days, was the strategy of secularize-and-synthesize.

“The holidays” are indeterminate and nonspecific. At one time “the holidays” were understood to extend only from Christmas Eve until the final gun of the last televised football game late on New Year’s Day.

Now we have the “holiday season,” driven by the consumer-confidence index. “Holiday season” may be the ultimate merchandising term, encompassing a time from Thanksgiving Day through New Year’s Day. But wait!

There’s the pre-Thanksgiving period, not all that far from Halloween. So let’s move the “holiday season” starting date back to October.

But why cease selling opportunities in January, already a dismal month in the Northern Hemisphere, when the “holiday season” can be extended through Presidents Day?

Eventually, the holiday season will meet itself coming and going, beginning on Labor Day and ending after Independence Day.

So what’s wrong with this? Whether celebrated in December or even if shifted to July, this festival of getting and having is a bad idea no matter when it occurs.

— It gives a false sense or meaning to what provides happiness.

— It purports to engender a feeling of cheer and good will, but that being achieved only with material things.

Good will, peace and joy don’t come from materialism.

The holidays are the festival of consumerism and materialism, a testimony to getting it wrong when it comes to the meaning of human happiness and fulfillment.

Gifts are “things.” Friendship doesn’t require gifts. Love and respect are not measured by price.

“What am I going to get Cousin Ralph?” portrays an obligation to give something on a certain day rather than a spontaneous gesture of generosity and friendship.

Wouldn’t it be nice if there was no particular day for giving? One could happen to be in a store one August day, see an item and think, “Judy would really like that,” and buy it for her.

What’s more genuine: giving from a sense of obligation imposed by society or the spontaneity of thinking of the other?