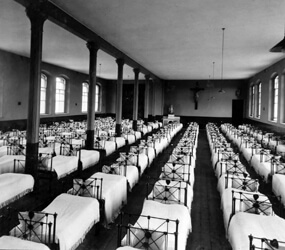 DUBLIN, Ireland – Irish Catholic Church and government officials welcomed a report by an independent commission on child abuse and expressed sorrow about the incidents it documented.

The 2,600-page report of the Commission to Inquire Into Child Abuse, published May 20, “throws light on a dark period of the past,” said Cardinal Sean Brady of Armagh, Northern Ireland, president of the Irish Catholic Bishops’ Conference.

“The publication of this comprehensive report and analysis is a welcome and important step in establishing the truth, giving justice to victims and ensuring such abuse does not happen again,” the cardinal said. “This report makes it clear that great wrong and hurt were caused to some of the most vulnerable children in our society. It documents a shameful catalog of cruelty – neglect, physical, sexual and emotional abuse – perpetrated against children.”

The report said abuse – physical and sexual – was endemic in government institutions for boys run by religious between 1940 and the late 1970s. Although girls were subjected to predatory sexual abuse by male employees or visitors, sexual abuse was not systemic in girls’ institutions, the report said.

“I am profoundly sorry and deeply ashamed that children suffered in such awful ways in these institutions,” Cardinal Brady said. “Children deserved better, and especially from those caring for them in the name of Jesus Christ.”

The cardinal said the Catholic Church “remains determined to do all that is necessary to make the church a safe, life-giving and joyful place for children.”

Dublin Archbishop Diarmuid Martin said the victims’ “stories of horrible abuse are, in many cases, stomach-turning; their courage in telling their stories (is) admirable.”

Archbishop Martin said all church organizations involved in the report should seriously examine “how their ideals became debased by systematic abuse.”

“We must find ways of ensuring that the cries and anxieties of children are heard and listened to,” he said. “This is not a report to be put on a shelf – it’s a real cry for a new look at the way we care for our children. If we truly regret what happened in the past, we must commit ourselves to a very different future.”

Eight chapters of the report were devoted to institutions run by the Irish Christian Brothers, whose schools cared for more boys than all the other religious-run institutions put together.

A May 20 statement by Brother Edmund Garvey, a spokesman for the order, said, “We apologize openly and unreservedly to all those who have been hurt – either directly or indirectly – as a result of the deplorable actions of some brothers or by the inaction or inappropriate action of the congregation as a whole.

“We are deeply sorry for the hurt caused. We are ashamed and saddened that many who complained of abuse were not listened to,” he said.

“We acknowledge and regret that our responses to physical and sexual abuse failed to consider the long-term psychological effects on children,” he said.

“At this time, I wish to extend my sincere and profound sympathy to those who were subjected to abuse while resident in industrial schools or other places where, as children, they should have felt safe and protected,” he said. “Unfortunately, we cannot undo the wrongs of the past. However, as a responsible and caring society, we must fully face up to the fact that wrong was done, and we must learn from the mistakes of the past.”

He praised the abuse victims who gave evidence to the commission over a nine-year period.