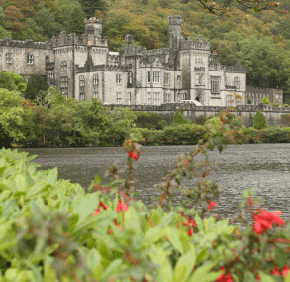 By Paul McMullen
pmcmullen@CatholicReview.org
DUNDALK – In 2001, when he was studying at the Pontifical North American College in Rome, Father T. Austin Murphy and three fellow seminarians spent their Holy Week break in Ireland.
They enjoyed their time in Dublin and the countryside, but an outbreak of hoof-and-mouth disease barred them from touring nearby Glendalough, home of the historic monastery established by St. Kevin in the sixth century.
“We couldn’t go to the ruins,” Father Murphy lamented recently.
The pastor of Our Lady of Hope in Dundalk and St. Luke in Edgemere, however, will have the opportunity to visit Glendalough and much more Oct. 7-16, when he leads a 10-day pilgrimage to Ireland that is organized by the Catholic Review.
Highlights include excursions out of Galway to the Marian Shrine in Knock; Croagh Patrick, the mountain where St. Patrick spent the 40 days of Lent in A.D. 441 A.D. in prayer and fasting, and the dramatic Cliffs of Moher.
Out of Dingle, pilgrims will encounter more natural beauty along the 100-mile “Ring of Kerry”; visit St. Mary’s Cathedral in Killarney; and venture on to Blarney Castle.
Back in Dublin, Father Murphy, who will celebrate daily Mass, will guide the group through St. Patrick’s Cathedral and Trinity College Library, which holds the 1,200-year-old Book of Kells.
“The artwork in the Book of Kells is beautiful, I can spend a whole day staring at it,” Father Murphy said. “It brought the Gospel to the people of Ireland, my people. That’s probably why I am Catholic. It’s going to be special.”
A Baltimore native and product of Mount St. Joseph High School in Irvington, Father Murphy hails from a large extended family that had its paternal roots at old St. Martin Parish in West Baltimore.
His grandfather’s brothers included the late Bishop T. Austin Murphy, a Baltimore auxiliary; he is also related to Wilmington Bishop W. Francis Malooly.
“I’ve heard County Cork, but that’s hearsay,” Father Murphy said, as to his family’s roots in Ireland. “In Cork (on that 2001 trip), I attended the Easter vigil with another seminarian. Among those baptized was a Sean Murphy. I met his mom, who said, ‘You’re a spitting image of my cousin, Emily.’ You can’t swing a shillelagh there and not hit a Murphy.”
The Catholic Review pilgrimage comes during “The Gathering,” a government-supported Irish tourism initiative aimed at attracting the descendants of emigrants of Ireland.
At Our Lady of Hope, Father Murphy pastors in Dundalk, named for a town in Ireland. His fellow pilgrims will include his parents, Austin and Catherine, parishioners of St. Agnes in Catonsville.
To the Ireland 2013 pilgrims who are seasoned travelers to the Holy Land, Father Murphy jokes, “We’re going to the Holier Land.”
To learn more about the pilgrimage, click here or telephone 1-800-713-980 or 443-524-3150.
Also see:
Local Catholics among those stuffing stands for Dublin’s Notre Dame-Navy game
PrevNext