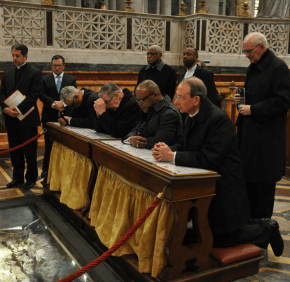 By Christopher Gunty
editor@CatholicReview.org
VATICAN CITY – In a whirlwind day in Rome, a small group of interfaith leaders from Baltimore went through two of the city’s Holy Doors during the Extraordinary Jubilee Year of Mercy as they began a pilgrimage of prayer for healing in the city of Baltimore.
Led by Archbishop William E. Lori, the group includes representatives of other Christian denominations, Muslim and Jewish faith communities. The group arrived the morning of March 1 in Rome and immediately set out to visit the Basilica of St. Paul Outside the Walls, where they were greeted by American Cardinal James M. Harvey, archpriest of the basilica, and entered through the Holy Door for the jubilee year.
Cardinal Harvey, former prefect of the papal household was appointed to his post at the Basilica of St. Paul, the site of the tomb of St. Paul, which by tradition is about two miles from where he was martyred. The Baltimore group prayed before the tomb, which sits below an altar in the second largest Christian church in the world. The saint’s remains have been there since A.D. 67 or 68.
The cardinal pointed out that there is an embarrassment of riches within Rome and the Vatican of beautiful churches. “But if you want a beautiful church where you can actually pray, think about this place.” The only one of the four major Roman basilicas not within the territory of Vatican, St. Paul Outside the Walls takes a little more effort to get to. “You can come and meditate and pray and you don’t feel jostled,” as may happen at the other major sites, Cardinal Harvey said. He attributed the calm to the influence of the Benedictine monks who have lived and served at St. Paul for 13 centuries.

Baltimore interfaith leaders pray at the tomb of the Apostle Paul, whose bones have been buried at this spot since the first century. At the Basilica of St. Paul Outside the Walls, the group learned about the history of the early evangelist, on a tour guided by American-born Cardinal James M. Harvey, archpriest of the basilica. (Christopher Gunty | CR Staff)

The Baltimore pilgrims also visited Cardinal Edwin F. O’Brien briefly at the headquarters of the Equestrian Order of the Holy Sepulcher of Jerusalem, of which he is the grand master. The cardinal, who is archbishop emeritus of Baltimore, said, “I hope these few hours in Rome will be a benefit” the the interfaith efforts to help heal the city in the aftermath of unrest in April 2015 and decades of systemic poverty.

Archbishop Lori said he and others had been thinking about how faith groups have been approaching these concerns, noting that all the faiths are working in education and social services. The pilgrimage was designed to further coordinate faith-based efforts in the city and foster the relationships between the leaders and their congregations.
A tour of St. Peter’s Basilica included stepping through the second Holy Door of the day. The pilgrims saw Michelangelo’s “Pieta,” in which Mary steadfastly holds the crucified Jesus and at the same time offers Him to the world.
Later the group visited U.S. Ambassador to the Holy See Ken Hackett, who formerly headed up Baltimore-based Catholic Relief Services. Hackett and his wife Joan received the Baltimore leaders at the ambassador’s residence in Rome.
Their discussion embraced several topics, including papal charity, the immigrant situation in Europe and the particular circumstances of Baltimore. Archbishop Lori told Hackett it was a joy to be with him and with this group of faith leaders.
“The idea is to send a signal that the religious community is pulling together and the wider community needs to pull together, especially coming up on the anniversary” of the death of Freddie Gray Jr. while in police custody. Gray’s death set off peaceful protests and violent riots around the city of Baltimore.
Lively discussions at lunch and dinner among the faith leaders focused on finding solutions to education, housing and jobs in the city, and how all these social ills are related.
Rabbi Steven M. Fink of Temple Oheb Shalom, called the day “phenomenal, not just because we saw some of the holiest sites in Christendom,” but because of the substantive conversations the pilgrims had together about the city of Baltimore and the chance to build relationships among them.
He said he hoped “some positive actions would come out of this to help our city.”
The Rev. Dr. Frank M. Reid III, senior pastor of Bethel A.M.E. Church in Baltimore, said the only term he could think of to describe the first pilgrimage day was “a great awakening.”
The first great awakening, he said, was the continued influence of the traditional religious faiths represented on the tour, especially Christians, as seen by the holy sites visited.
Another great awakening regarded “relationships and ideas we discussed to make our city better.” And, referring to the visits they had made during the day, he said it was “a great awakening to see so many people in Rome well-versed about what is going on in Baltimore.”
He said from these great awakenings will come greater works, citing the Gospel of John, chapter 14, in which Jesus says, “Whoever believes in me will do the works that I do, and will do greater ones than these, because I am going to the Father.”
Rev. Reid said, the Gospel is a reminder of the work to be done. At the end of a long day on the run, “As tired as we are, everybody is energized.”