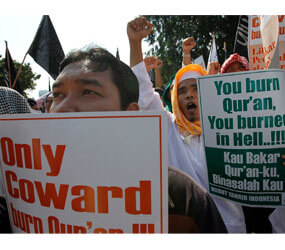 WASHINGTON – Dozens of religious leaders across the spectrum of faiths issued a joint statement Sept. 7 denouncing past and planned attacks against Muslims and Islamic houses of worship and calling for a new era of interfaith cooperation.

In a news conference at the National Press Club, dozens of clergy men and women flanked Ingrid Mattson, the president of the Islamic Society of North America, as she described recent attacks on Islam as an aberration of the true views of American Christians, Jews and nonreligious people alike and pleaded with Muslims around the world not to take the hateful views of a minority as representative of the whole nation.

The event focused on the plans of a small Gainesville, Fla., evangelical church to publicly burn copies of the Quran, the Islamic holy book, on Sept. 11, the ninth anniversary of terrorist attacks on the United States at the hands of Islamic extremists. Plans for mosques to be built in several parts of the country have met strong opposition this summer, with vandalism to construction equipment and other incidents.

The statement also noted that “we have become alarmed by the anti-Muslim frenzy that has been generated” over the plans to build an Islamic community center near the site of ground zero in New York. It said the group’s concern in meeting that day was not to debate the New York project, “but rather to respond to the atmosphere of fear and contempt for fellow Americans of the Muslim faith that the controversy has generated.”

Earlier in the day Gen. David Petraeus, the U.S. commander in Afghanistan, warned that religious extremists might use images of the burning Quran to incite violence. And spokesmen at the White House and the State Department took stands that echoed Petraeus’ comment.

“Anytime activity like that puts our troops in harm’s way would be a concern to this administration,” White House spokesman Robert Gibbs said at the daily press briefing.

State Department spokesman P.J. Crowley said Americans should stand up and reject the the church’s plan to burn copies of the Quran as “un-American” and “inconsistent” with American values.

The religious leaders’ statement said they “denounce categorically the derision, misinformation and outright bigotry being directed against America’s Muslim community. We bear a sacred responsibility to honor America’s varied faith traditions and to promote a culture of mutual respect and the assurance of religious freedom for all.”

In another section, it said “no religion should be judged on the words or actions of those who seek to pervert it through acts of violence,” and that “politicians and members of the media are never justified in exploiting religious differences as a wedge to advance political agendas or ideologies.”

They called for “a new day in America when speaking the truth about one another will embrace a renewed commitment to mutual learning among religions.”

Cardinal Theodore E. McCarrick, retired archbishop of Washington, said America’s religious leaders have no choice but to stand up in protest of attacks that are “affecting so many good people who have brought Islam to this country,” particularly by denouncing those who “bear false witness against our neighbors.”

Mattson noted that in both Christianity and Islam, it is considered a sin to bear false witness against another. She also explained that as a young religious community, American Muslims lack the organization, the funds and the manpower to fight back against what she said are well-funded, well-organized efforts to portray Muslims as dangerous.

“The act that is going to be committed there is nothing compared to the love being shown” elsewhere in the community, he said.

Several speakers made note of the First Amendment’s religious freedom provisions, saying that just as they currently protect the right of a minority population of Muslims to worship freely, in coming generations they may instead be defending the rights of minority Christians to do the same.

“We stand by the principle that to attack any religion in the United States is to do violence to the religious freedom of all Americans,” said the statement. “As religious leaders we are appalled by such disrespect for a sacred text that for centuries has shaped many of the great cultures of our world and that continues to give spiritual comfort to more than a billion Muslims today.”

The Rev. Welton Gaddy, head of the Interfaith Alliance and pastor of Northminster Baptist Church in Monroe, La., said a response of the interfaith community needs to be to “teach that hate is neither a religious nor a democratic value.”

Participants in the conference said the next steps need to include organizing similar interfaith dialogue sessions at the local level and concerted efforts by religious leaders to denounce attacks on Islam in their churches and synagogues.

Rabbi David Saperstein, executive director of the Union for Reform Judaism, said some of the participants in the conference would be meeting with Attorney General Eric Holder later in the afternoon on the issue.

“It is no longer an option to be silent,” Rabbi Saperstein said. “We have been too quiet.” He said not only academics, but “common people,” must “stand up for our Muslim brothers and sisters and say this is not OK.”

“I fear the story of this animosity will be taken to be the story of the real America,” Cardinal McCarrick said. “It’s not. America was not built on hatred, but on love.”

“This is not the real America,” he added. “When you attack one religion, you attack them all.”