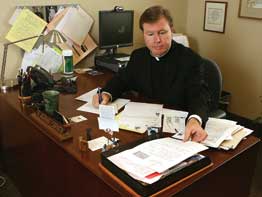 When Father Gerard Francik recently interviewed a 19-year-old man who was thinking about becoming a priest, the archdiocesan vocations director asked him to talk about his prayer life.

The former high school football player told Father Francik how he faithfully makes a holy hour in front of the Blessed Sacrament, attends Mass or Communion services, prays the rosary and observes the liturgy of the hours – every day.

“I was just blown away,” said Father Francik. “He was very dedicated to his faith.”

That young man is typical of the kind of people who are stepping forward to become priests these days, according to Father Francik. Many are still in their teens, and they show unbridled enthusiasm for living out their religious convictions, he said.

“This generation has a different view,” said Father Francik. “They’re much more service-oriented. They’re selfless, and they want to give their all.”

The vocations director said there are more young men inquiring about becoming priests than in previous years.

“We have 16- and 17-year-olds just beating down the door,” said Father Francik. “It gives me encouragement to see so many young people on fire for their faith. It gives us hope for the future.”

There are currently 26 men studying to become priests for the Archdiocese of Baltimore. They come from all parts of the archdiocese, and they include several international seminarians from Central and South America and one from Nigeria.

Last year’s incoming seminarian class stood at 13 – the biggest class in nearly two decades, according to Father Francik. He expects that this year’s class will also hit double digits.

Although parishes and schools have become more proactive about encouraging Catholics to consider becoming priests, sisters, brothers or deacons, Father Francik said there are still some that need to do more.

“Some of our parishes have three or four guys who are in the seminary and many have zero,” said Father Francik, noting that there are about 20 parishes represented among the men currently preparing for the priesthood.

He observed that if every parish could encourage just one man to consider the priesthood, more than 150 new priests might be ordained in the next several years.

“The pastor really sets the tone,” said Father Francik, noting that personal invitations to consider the religious life are critical. “If you talk about vocations and pray for vocations, it makes a difference.”

It’s important for parents to be open about the possibility of their sons becoming priests, Father Francik said. And it’s up to everyone to show their support to those in the discernment process, he said.