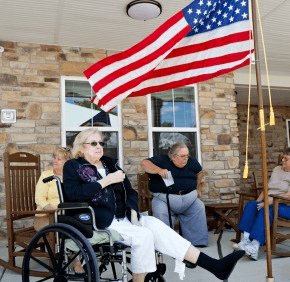 By Maria Wiering
mwiering@CatholicReview.org
NOTTINGHAM – Naomi Phillips, 85, sat in the shade outside Village Crossroads II watching the community’s formal dedication May 19. She moved to the new Catholic Charities affordable senior housing community in March after living most of her adult life in Latrobe Homes, subsidized city housing in East Baltimore.
Village Crossroads, she said, is “real nice” and reminds her of her childhood home in North Carolina.
“I love it because I was born in the country,” she said. “There’s nice country air and peace and quiet.”
The 180-unit community includes two buildings, Village Crossroads I and II, near the intersection of Belair Road and I-695. They were funded through grants from the U.S. Department of Housing and Urban Development. Village Crossroads I also received state funding.
The outdoor dedication drew more than 130 people, including residents, their friends and family members, Archbishop William E. Lori, Catholic Charities staff members, public officials and their representatives, and key participants in the project’s fruition.
Before blessing the facade of one of the buildings with holy water, Archbishop Lori praised Catholic Charities’ commitment to helping the elderly and poor.

“Thanks to Catholic Charities and thanks to their community partners, places like Village Crossroads have been created for worthy residents to call home, a place where they can feel safe and live with a sense of dignity and self-respect,” he said.
Catholic Charities operates 24 affordable senior housing buildings comprising almost 1,800 apartments.
One of those Catholic Charities communities inspired John Fantom, 88, to sell his Nottingham property, once the site of his greenhouse business, to Catholic Charities for Village Crossroads. His sister, Alice Jeanne Fantom, lived at Reister’s Clearing in Reisterstown before her death, and his visits there sparked a desire to use property for the same purpose.
The property was right for Catholic Charities, and now Fantom’s vision is a reality. A parishioner of St. Isaac Jogues in Carney and a graduate of Loyola Blakefield, Fantom and his wife, Carolyn, were honored at the Village Crossroads dedication.
All of Village Crossroads’ apartments are occupied. More than 1,700 people are on the waiting list, said William J. McCarthy, Catholic Charities executive director.
“The numbers show the need of senior housing throughout Maryland,” he said.
Despite that need, Catholic Charities does not have new affordable senior housing projects planned, said Dale McArdle, Catholic Charities senior communities’ division director who oversaw the project.
The Section 202 HUD funding that has supported Catholic Charities’ affordable senior housing construction and operation has not been available since the agency’s fiscal year 2011.
The Section 202 program provides interest-free capital advances and operating subsidies to nonprofit organizations for low-income senior housing. HUD provided $10.2 million for Village Crossroads.
At the dedication, Mary Ann Henderson, director of HUD’s Baltimore field office, raved about the federal agency’s longtime relationship with Catholic Charities and the quality of the social service agency’s projects, calling the 20 buildings that benefit from Section 202 funding “the stars in our sky.”
“It would be great if the new Pope Francis could see this property and others like it that Catholic Charities has done over the years, because I think it really reflects the mission that he’s talked about so much that we’re all embracing – to give back to people, to help people in need,” Henderson said.
“I hope powers that be in Washington and in Congress will see fit to continue this,” she said of Section 202 funding. “I think there’s hope for us. … If they would come out and visit these properties, they would see this is one of the best things we’ve got going.”
Village Crossroads I and II were designed by Marks, Thomas Architects and built by Harkins Builders, costing about $25 million.
Residents are required to be 62 or older and have an income of no more than 50 percent of the median income, as determined by HUD, or 60 percent of the median income for Village Crossroads I, which was funded in part by the Maryland Low Income Housing Tax Credit. All residents pay below-market rent, McArdle said.
Related articles:
Baltimore Catholic League players team up with Catholic Charities
Minimum wage winners, losers uncertain
Also see:
‘Inspiring’ priest who is deaf leads inaugural Mass in Archdiocese of Baltimore
‘The quintessential Don’: Loyola Blakefield dean transitions to new role
PrevNext