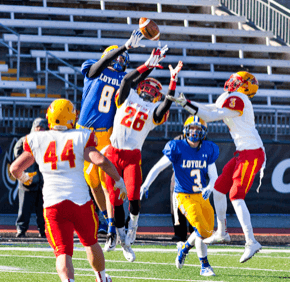 By Paul McMullen
pmcmullen@CatholicReview.org
TOWSON – Is there a better representative of the passion, tradition and values inherent in the Turkey Bowl than Erik Evans?
He is well-versed in the history of the Thanksgiving Day prep football rivalry between Calvert Hall and Loyola Blakefield, which marked its 94th renewal Nov. 28.
Evans is a legacy, as he followed his father to Calvert Hall, but he also knows about the blue and gold of Loyola Blakefield, where many of the men on his mother’s side went to school.
“My family is unique,” said Evans, who attended the parish school at St. Ursula in Parkville and was a young boy when he attended his first Turkey Bowl, at M&T Bank Stadium. “One side went to Calvert Hall, the other to Loyola. The winner gets to brag.”
Watch a video.
The Dons around his dinner table were sensitive to the disappointment Evans felt after Loyola Blakefield posted a 21-20 victory on Minnegan Field at Johnny Unitas Stadium, in what is believed to be only the second overtime game in the series.
After Evans scored the Cardinals’ final points on a 9-yard touchdown catch to draw within one point in the overtime, the Dons blocked the point-after kick, ending a four-game Calvert Hall win streak in the series, its longest in nearly three decades.
“It’s really tough to go out this way,” Evans said. “We didn’t perform well today, (but) to lose on a blocked extra point that was supposed to tie it … it’s really hard to think this is even real right now.”
Evans, a tight end and wide receiver, and offensive lineman Trevor Beam had more invested than most in the outcome.
They were the only sophomores on the Cardinals’ varsity in 2011. As freshmen, they beat the Dons to complete a Maryland Interscholastic Athletic Association A Conference J.V. championship, and wanted badly to finish their prep careers 4-0 against their rival.
“It’s a game you always get excited for,” Beam said beforehand. “We like beating Loyola in anything.”
After losing in the A Conference championship game to Gilman the last two years, Calvert Hall brought just three wins into this Turkey Bowl, raising the stakes.
“The Turkey Bowl is almost a season in and of itself, whether we’re playing in the (A Conference) championship game or not, this game is it,” said coach Donald Davis, a member of the Calvert Hall Class of 1996 who went to Johns Hopkins. “Many of the guys I played with at Hopkins were from out of town, and the best way for me to explain the Turkey Bowl is Army-Navy.”
Mirroring the service academies, who meet Dec. 14 in Philadelphia, Davis has great respect for Loyola Blakefield and his counterpart, Brant Hall.
“Loyola deserved to win today,” said Davis, who felt bad for his seniors. “It’s difficult when we aren’t able to send them out the way we want to.”
At Calvert Hall, Turkey Bowl week begins with “Senior Sunday,” which includes Mass, brunch, a bouquet for the mothers and a talk from the coach about each of the boys preparing to conclude their high school football careers.
Calvert Hall’s only offensive touchdown in regulation came on a 3-yard run by Kevin Nickel behind Beam, the right tackle, and Evans, lined up at tight end, on a play called “46 Wham.”
Three catches in the Turkey Bowl gave Evans 44 for the season, for 630 yards and five touchdowns.
In an era of specialists, he stands out. Evans has accepted a scholarship to play lacrosse for Calvert Hall, but doesn’t have to wait until spring to let his competitive urge soothe his Thanksgiving Day aches, as he also plays basketball for the Cardinals.
Also see:
Inside Sports: Loyola’s water polo team flows into swim season
Inside Sports: NDP proves its A conference caliber
Inside Sports: No bumps for Seton Keough Field Hockey
Inside Sports: Reif cup honors Curley coach, Calvert Hall parent
Inside Sports: John Carroll’s marching band plays, and practicies, hard
Inside Sports: Ellie Gonzalez a national-class runner at Catholic High
Inside Sports: Spalding’s broad-based program decades in the making
PrevNext