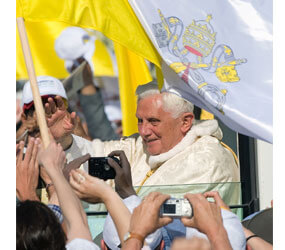 The Year of St. Paul. The Year for Priests. A major social encyclical. A Holy Land pilgrimage. A first meeting with President Obama. Ten new saints. An African trip and an African synod. A Facebook debut. A controversial concession to Catholic traditionalists. An unexpected overture to disaffected Anglicans.

And those are just the highlights, of course. Being pope is a day-in, day-out ministry, and over the course of the past year Pope Benedict met with more than 200 dignitaries and groups, held talks with more than 300 bishops and celebrated more than 50 major liturgies.

The year brought moments of deep personal satisfaction, as when the German pontiff prayed in silence before Christ’s empty tomb in Jerusalem, or when he arrived on his first African visit to a tumultuous welcome by hundreds of thousands of Cameroon residents.

But the pope’s disappointment was also evident in 2009, in part because he felt misunderstood by some of his own faithful and the mass media over difficult decisions or statements.

In January, the pope announced that he was lifting the excommunications of four bishops of the Society of St. Pius X to open the way toward reconciliation talks with the traditionalist group – a move that had been opposed by some bishops in several countries.

Media attention quickly focused on the fact that one of the four, Bishop Richard Williamson, had given interviews denying the extent of the Holocaust. Suddenly the German-born pope was on the defensive, having to assure Jewish leaders and others that his initiative aimed at church unity and in no way represented a backtracking on the church’s teachings against anti-Semitism.

One of the most remarkable documents of 2009, in fact, was the pope’s subsequent letter to the world’s bishops expressing his amazement that even some Catholics had misunderstood him and attacked him “with open hostility.”

The pope’s visit to Africa in March was a weeklong experience of intense liturgies, discussions with bishops and moving encounters with youth, the disabled and even a group of Pygmies.

But the media impact was overshadowed by the pope’s remarks to reporters on the first day of the trip, when he spoke of the church’s strategies against AIDS and said, “One cannot overcome the problem with the distribution of condoms. On the contrary, they increase the problem.” The comment drew widespread criticism, although some experts agreed that over-reliance on condoms was a problem in African countries.

The Synod of Bishops for Africa in October brought the continent back into the Vatican spotlight. The pope presided over the synod’s assemblies and, at the conclusion, received 57 pastoral proposals to elaborate into a future document on the church in Africa.

In May, Pope Benedict traveled to Jordan, Israel and Palestinian territories. The eight-day trip was a biblical pilgrimage, an interfaith mission and a political balancing act all rolled into one. The pontiff visited a mosque in the Jordanian capital, prayed at the Yad Vashem Holocaust memorial in Jerusalem, and blessed cornerstones for new Christian churches and facilities in the region.

In June, the pope closed the Year of St. Paul and opened the Year for Priests. In weekly talks and liturgical celebrations focusing on St. Paul, the pope sketched a detailed portrait of the man considered the model of Christian conversion and the archetypal missionary.

In launching the Year for Priests, the pope said the church must acknowledge that some priests have done great harm to others, but it also must thank God for the gifts the majority of priests have given to the church and the world.

In July, the pope issued his long-awaited encyclical on economic and social justice, “Charity in Truth.” It called for reform of international economic institutions and practices, and said the global economic crisis stemmed in large part from the moral failures of greedy financiers and investors.

The pope gave a copy of his encyclical to President Barack Obama when the two leaders met for the first time at the Vatican in July, along with a copy of a recent Vatican document on biomedical ethics. In their private talks, which the Vatican said took place in an atmosphere of “great serenity and great cordiality,” the president “explicitly expressed his commitment to reducing the numbers of abortions and to listen to the church’s concerns on moral issues,” the Vatican said.

In September, Pope Benedict welcomed the new U.S. ambassador to the Vatican, Miguel Diaz, and in a speech outlined wide areas of potential cooperation with the Obama administration. At the same time, echoing concerns by U.S. church leaders, the pope called for respect for the life of the unborn and protection of the right to conscientious objection on the part of health care workers.

Among the new saints proclaimed by the pope in 2009 were two with strong U.S. connections: Father Damien de Veuster, the 19th-century Belgian missionary who ministered to people with leprosy in Hawaii, and Sister Jeanne Jugan, a French nun whose Little Sisters of the Poor continue to assist the elderly in the United States and more than 30 other countries.

In internal church matters, the pope in May ordered an apostolic visitation of the Legionaries of Christ and their institutions following disclosures of sexual impropriety by the order’s late founder, Father Marcial Maciel Degollado.

In October, the Vatican unveiled Pope Benedict’s new plan for welcoming Anglicans who want to be in full communion with the Roman Catholic Church while preserving aspects of their Anglican spiritual and liturgical heritage.

As the year wound to a close, the pope buffed up his “green” credentials in his message for World Peace Day 2010. The message said degradation of the environment is a pressing moral problem that threatens peace and human life itself, and called for action on a global and personal level.