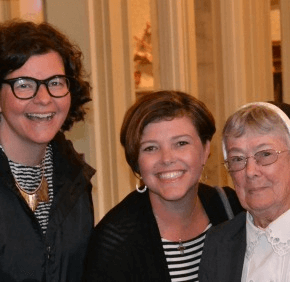 By Erik Zygmont ezygmont@CatholicReview.org Twitter @ReviewErik
TOWSON – Following a Mass of Thanksgiving celebrated in her honor Oct. 1, School Sister of Notre Dame Hilda “Hildie” Marie Sutherland described her plans for her so-called retirement from the Institute of Notre Dame.

“IND is my love and my home,” Sister Hildie. “I’m going to come back and volunteer on Mondays, Tuesdays, Wednesdays and Thursdays, and take care of God’s poor.”

Monsignor James W. Hannon, director of clergy personnel for the Baltimore Archdiocese and the main celebrant of the Mass at the Church of the Immaculate Conception in Towson, acknowledged Sister Hildie’s more than 60 years of service at the Institute of Notre Dame.

“IND was established in 1847, 170 years ago,” Monsignor Hannon said in his homily. “Hildie, your own presence at IND spans over one-third of the life and history of that institution – in other words, you yourself are an institution.”

The Mass, concelebrated by Father Joseph Barr, pastor of Immaculate Conception, brought IND alumni, current students, faculty, members of the School Sisters of Notre Dame and well-wishers to Towson on a rainy Saturday to send off the diminutive sister.

Over the years, Sister Hildie, now in her mid-80s, has filled various roles at the all-girls high school in Baltimore – running the school store, tidying the building and organizing student clubs, to name a few.

Institute of Notre Dame students, alumni and well-wishers filled Church of the Immaculate Conception in Towson Oct. 1 for a special Mass of Thanksgiving in honor of School Sister of Notre Dame Hilda Marie Sutherland, a fixture at IND since she was 14. (Courtesy Lisa Brown)

In a reflection delivered at the end of Mass, School Sister of Notre Dame Charmaine Krohe, provincial leader of the sisters’ Atlantic-Midwest Province, noted that Sister Hildie used to refer to her as her “boss.”

Sister Charmaine paused after the word, giving the congregation time to laugh.

“Anyone who knows Hildie knows who the boss really is,” she said.

She commented on Sister Hildie’s legacy, which is “not about property or money.”

“It’s the kind of legacy that says how much Hildie’s life has enriched your own,” she said. “Hildie, you have left the biggest legacy any one person could ever leave.”

Those in attendance agreed.

“She is amazing,” said Towson University student Nina Manzo, of the IND class of 2015. “She taught me to care about other people more than myself. Coming back here today made me realize how much I miss IND.”

Living on the IND campus when it included the School Sisters of Notre Dame’s motherhouse and remaining there when the motherhouse moved, Sister Hildie, who now lives in community with two other sisters off campus, was the first to greet early morning arrivals at the school on Aisquith Street.

“It was very relaxed,” said senior Sophie Williams, editor of wINDows, IND’s newspaper. “She would say, ‘Hi Hon,’ and ask me how the play was going.”

David Ring, who became president of IND in 2015, said he had coffee with Sister Hildie every morning.

“It was my history lesson,” he said, adding that the knowledge she imparted of IND and the School Sisters of Notre Dame “gave me the foundation I wouldn’t have got reading a book.”

“We would sit there for four, five, six minutes in silence,” he said, adding that a true friendship does not require constant dialogue. “She would lend a presence to my day and get me off on the right foot just sitting with me for a while.”

Sister Hildie offers more than moral support. Her “Hildie’s Helpers,” a student club that makes sandwiches to feed the needy and collects food for special Thanksgiving and Christmas outreaches, has filled countless bellies.

“For you, a thousand times over,” is a memorable quote of friendship from “The Kite Runner,” a novel Reeb teaches.

As he accompanied Sister Hildie and sandwiches to a homeless shelter one evening, he observed as she granted a man’s request for food outside the shelter, a bit of a no-no among charity professionals.

“For you, a thousand times over,” she said as she handed over a sandwich.

She meant it, too, and her generosity of spirit has been noticed. During the 1968 Baltimore riots, IND was spared. Attached to the front door was a black armband with the words “Sister Soul,” according to Reeb.

Sister Charmaine said that when Sister Hildie declined to move to the motherhouse, she initially worried about her safety.

Sister Hildie declined to address the crowd, but she walked up to the podium and shed tears as Sister Charmaine put her arm around her.

“She said she wants to thank you for being here, and she loves you all,” Sister Charmaine said.

By giving food to neighbors, IND roots holiday – and students – in giving