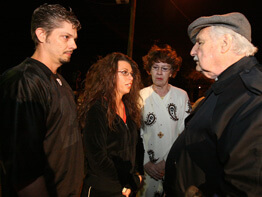 MICHIGAN CITY, Ind. – Called in prayer a “dark act done under the cover of night,” the execution of convicted murderer David Leon Woods was carried out in the early hours of May 4.

Woods, 42, had been sentenced to death 22 years earlier for the stabbing death of a family friend, Juan Placencia, during an attempted robbery in April 1984 in Garrett, Ind. Woods was 19 at the time.

With appeals exhausted and clemency denied by Indiana Gov. Mitch Daniels, a group of death penalty opponents began to assemble at the Indiana State Prison parking lot shortly before sunset on the eve of the execution to keep vigil in support of Woods, who reportedly had undergone a conversion of heart and a transformation of faith while behind bars.

Before entering the prison to witness the execution, the Woods family stopped to address the group.

“David is a special person, a godly person and he has no fear at all tonight,” said Tommy Yeager, the prisoner’s brother-in-law. “He is at total peace and feels when he leaves here tonight, he will be walking with Jesus.”

A tearful Yeager pointed to Scripture while noting that people are so quick to judge others for what they do wrong: “If you read the Gospel of Matthew, it asks why do we condemn our brother for murder? Love and forgive them, for as you judge so will you be judged. Why do you notice the speck in your brother’s eye and not the log in your own?”

Speaking on behalf of his brother-in-law, Yeager told the crowd that Woods was grateful for their prayers and support and hoped his death would bring light to the issue of the death penalty in this country.

Lea Govert, a parishioner from Holy Spirit in Winfield Township, regularly attends death vigils at the state prison. Citing the late Cardinal Joseph Bernardin of Chicago, she said it is worth repeating his expression that life is a seamless garment from birth until natural death. “I’m here to bear witness that this should not happen,” Govert said.

Many in attendance expressed concern for the mitigating factors surrounding the execution. Woods was only 19 at the time and reportedly under the influence of drugs.

During the appeals process, defense attorneys questioned state methods for determining if Woods had some degree of mental retardation, which would have deemed him ineligible for execution. Woods also had accepted full responsibility for his actions and expressed remorse.

“This guy has done everything he’s supposed to do. He’s changed, shown remorse and yet we’re going to kill him anyway,” said Sean Napier, a frustrated local resident.

Mary Lou Pilkinton, Woods’ mother, was overwhelmed with emotion as she talked about how much she would miss her son. “Thank you all for your prayers and God be with you,” she said.

Mary Ann Pilkinton Yeager was only 9 when her brother went to prison for his crime. She called her brother her spiritual guide and explained how he had come to minister to many of his fellow inmates, bringing the hope of Christ into their lives.

For Woods, even the last meal shared with his family the previous evening had spiritual overtones. As Woods enjoyed a meal of pizza and soda pop with the 12 closest to him, he called the gathering the “breaking of the bread.”

While it was not his birthday, he explained to his family that the day of his execution would become a new birth with Jesus, she said. Woods spent those last moments comforting his family and telling them not to worry, saying he understood the sorrow and pain his victim’s family had experienced and hoped they could one day find a way to forgive him.

According to Pilkinton Yeager, Woods also admonished his family to strive to become better people themselves.

“He told my mom to stop talking about people so much,” she said. “He asked her to try to be better and she promised him she would.”