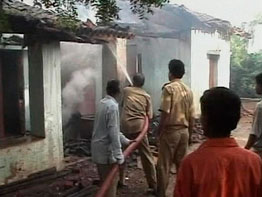 NEW DELHI – Catholic education institutions across India planned to close Aug. 29 to protest the continuing violence against Christians that has left at least 10 people dead in India’s eastern Orissa state.

The church also will observe Sept. 7 as a day of prayer and fasting for Christians in Orissa, said the Catholic Bishops’ Conference of India at a press conference in New Delhi Aug. 26. The Asian church news agency UCA News reported on the press conference.

Cardinal Varkey Vithayathil of Ernakulam-Angamaly, president of the conference, appealed to all Catholic groups to organize “peaceful rallies across the country to register strong protest against the repeated attacks” on Christians.

Reports indicated no letup in the anti-Christian violence, in which at least 10 people had died by Aug. 27. They recounted how armed men ransacked and burned church properties in the state.

At the end of his Aug. 27 weekly general audience at the Vatican, Pope Benedict XVI appealed to “religious leaders and civil authorities to work together to re-establish among members of the different communities the peaceful coexistence and harmony which always have been a distinctive sign of Indian society.”

The pope told visitors and pilgrims at his audience that he was saddened deeply by the violence in Orissa, “unleashed following the deplorable assassination of the Hindu leader Swami Laxmanananda Saraswati.”

Hindu radicals started attacking Christians after the swami and five of his associates were killed Aug. 23 in the state’s Kandhamal district. Maoists reportedly claimed responsibility for the killings, but some Hindu groups have alleged that Christians masterminded the killing, a charge all Christian churches and denominations have denied.

Father Upasi told UCA News Aug. 26 that only a little information is available from priests and nuns in parishes, because the violence has made communication difficult. Most have gone into hiding, he added.

The priest explained that mayhem broke out Aug. 25 when Hindu radical groups observed a statewide shutdown to protest the Hindus’ killing. Mobs threw stones at the Cuttack-Bhubaneswar archbishop’s residence in the state capital despite a police presence, he added.

The worst-affected area is Kandhamal, where the 85-year-old Hindu leader was based. For several decades the swami had opposed conversions to Christianity.

Bidhan Nayak, a Catholic social worker in Kandhamal, told UCA News Aug. 26 that Hindu radicals killed one person in Badimunda village. Despite a curfew, armed Hindu activists roamed the area “in a one-sided attack,” he said.

Another mob molested a Catholic nun working with the pastoral center in Nuagaon, also in Kandhamal. Nayak said most local Christians have fled to forested areas.

Archbishop Pedro Lopez Quintana, the Vatican nuncio to India, told Vatican Radio Aug. 26 that the Hindu fundamentalists are trying to impose a Hindu state on the entire population.

Archbishop Lopez said the Catholic Church in India “is resolute and, despite this horrendous experience of violence, it will go back to carrying out its work for the good of all, particularly for the poorest.”