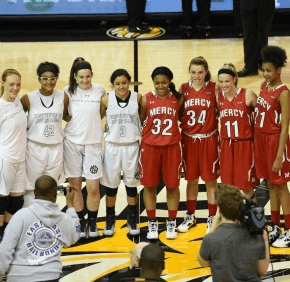 TOWSON – Two sporting traditions began in 1967. The Super Bowl is an international brand, but in Baltimore, nothing elicits more passion than “The Game.”

The Institute of Notre Dame and Mercy High School renewed their girls’ basketball showcase Jan. 29 at Towson University’s SECU Arena for the 50th time, with the Penguins posting a 41-26 victory over the Magic. It drew more than 3,000 alumnae, students, prospective students, Baltimore Archbishop William E. Lori and the woman who started it all in 1967.

Pauline Smith said “she taught eight periods a day and coached every sport” when Mercy began playing varsity athletics in 1962.

She had gone to what was then Towson State College, before Title IX was introduced or the NCAA recognized women’s athletics. Working on a shoestring budget and looking for a way to raise funds, she found an in through one of her JV parents, the late Bill LeFebvre, who before going on air for Channel 45 worked promotions for the old Baltimore Bullets.

In 1967, The Game began pitting Mercy against IND, and over five decades has become an annual reunion and natural marketing tool, coming just before the start of National Catholic Schools Week, which begins Jan. 31.

“The loyalty here, I love that,” said Smith, a parishioner of St. Joseph in Fullerton who left education to raise two daughters and then had a second career as a national sales manager for Nestle. “I still go to lunch with friends from the class of ’64. You look up in the stands and see grandparents and parents and alumnae. The girls make their boyfriends come along and watch.”

Smith was an honorary captain, along with Mary Ella Marion, the winningest coach in Mercy history; former IND coaches Jerry Hahn and Linda King, who came up from Florida; and one of King’s stars from the class of 1980, School Sister of Notre Dame Patricia McCarron, the president of Notre Dame Preparatory School.

IND, which got 14 points from sophomore Ja’Lyn Armstrong and 10 from senior guard Amber Kappner-Jones, who previewed The Game for the student newspaper, wINDows, won for the third straight year.

Sister Patricia played when the Penguins enjoyed a similar run, helped by two members of the IND class of ’81, Janet Shettle and Cathy Just.

Brought up from the JV in 1978, Just went 4-0 in The Game, always good for a flood of memories. A veterinarian, she worked in Boulder, Colo., for 27 years. Tending to a black Lab there one day, the owner looked at her IND ring, asked her class and said she was “IND, class of 1956.”

Shettle wore a blue IND windbreaker that was at least 35 years old. She returns to IND every Christmas to help School Sister of Notre Dame Hilda Marie Sutherland, aka “Sister Hildie,” decorate.

IND sophomore Ja’Lynn Armstrong goes up for two of her game-high 14 points. (John Strohsacker/Special to the Review)

A week of no school because of the previous weekend’s winter storm only served to increase the anticipation and nerves of teenage girls who play in the Interscholastic Athletic Association of Maryland B Conference.

Nearly four minutes had been played before Mercy’s Katelin Holt, who finished with a team-high eight points, got the game’s first basket, but Kappner-Jones responded with a three-point play in transition and coach Robert DuBose’s Penguins never trailed again.

They led 21-12 at halftime, and the outcome was a foregone conclusion with two minutes left, when a PA shout-out to Sister Hildie drew a loud, standing ovation. Ironically, the IND institution was on the Mercy side of the arena, helping at the Penguins’ merchandise stand.

Just as the president works the Army-Navy football game, Archbishop Lori split time between IND and Mercy fans after taking the PA microphone from WBAL-AM 1090’s Keith Mills to offer a pre-game prayer.

“It’s two great women’s Catholic schools that are just terrific in every respect,” the archbishop said. “They’re competing in a beautiful, healthy way. This is a great example of how you can be competitive but friendly at the same time. … I’m just happy to come out and support both schools.”

Archbishop William E. Lori makes comments prior to “The Game.” (John Strohsacker/Special to the Review)

Monsignor Richard P. Hilgartner, pastor of St. Joseph in Cockeysville, was on the Mercy side, flanked by his sisters and cheering on his niece, Caroline Cummings, a senior guard for coach Steve Anderson’s Magic who is headed to Drexel University, where she’ll play lacrosse.

No one has a more interesting perspective on The Game than her mother, Kristy, who graduated from IND in 1988, but is in her 20th year as a college counselor at Mercy.

“It’s a big rivalry,” she said. “They’re very similar schools, but the girls don’t understand that.”

Her daughter gets it. At the end of the post-game handshake line, Caroline encountered IND senior guard Sarah Aviles, and the two grabbed each other in a sustained bear hug.

“She’s been my best friend since elementary school,” Caroline Cummings said, of the parish school at Immaculate Heart of Mary in Baynesville. “We play the same sports, soccer, basketball and lacrosse. I’m glad we got to play each other one last time in basketball. I really wanted to win, but I’m happy for her.”

Coach Robert DuBose raises the trophy given to his IND team after their 41-26 victory over Mercy in the 50th version of “The Game.” (John Strohsacker/Special to the Review)

Angelo Petruccy, an Archbishop Curley High School senior and student intern for the Catholic Review, contributed to this article.

IND vs. Mercy: ‘The Game’ resonates in parish basketball league