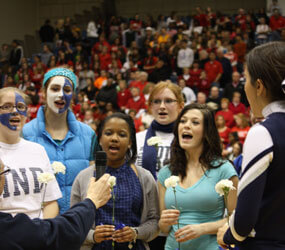 TOWSON – What’s red, white and blue, and has enough spirit to pack a college arena?

Baltimore’s Institute of Notre Dame and Mercy High School staged the 44th edition of their “Big Game” in girls’ basketball Jan. 29 at Towson University. The Magic won 45-24 in a rebuilding season for both programs, but the pertinent statistic was the attendance, approximated at 4,800.

What other event linked to the Archdiocese of Baltimore brings that many people together on a cold winter’s night?

It more than doubled the crowd Towson University got Dec. 10, when the Tiger women upset the University of Maryland, just three years removed from their National Collegiate Athletic Association championship.

Mary Ella Marion, the Mercy coach and athletic director, was in its Class of 1976. She remembers playing the second leg of the Interscholastic Athletic Association of Maryland rivalry at Loyola Blakefield and UMBC, and how it outgrew Loyola University Maryland’s Reitz Arena in the 1990s.

“The game began to take on a life of its own when it was at Loyola (University),” Marion said. “One of the facility managers there suggested we look at another venue, and it’s worked out wonderfully at Towson.”

The event is to IND and Mercy what the Thanksgiving Day football game at M&T Bank is for Calvert Hall and Loyola Blakefield, equal parts athletic contest, reunion and social mixer.

This year’s crowd ranged from the presidents of both institutions, Religious Sister of Mercy Carol E. Wheeler and IND’s Charisse Fenari Wernecke, to young girls being introduced to the tradition by their parents and grandparents.

The fathers clubs from the rival institutions teamed to raise more than $800 for Wings of Hope, an outreach in Haiti where the director of education is K.C. Bersch, IND Class of 1998.

“Somebody just dropped a $100 check in there,” a father said at halftime, pointing to a container.

Down 11-9, Mercy used a 9-0 run to gain control and a focus that doesn’t come easily at the event.

“We have our pep rally the afternoon of the game,” Marion said. “The cheerleaders, dance team and their parents prepare dinner for us. After dinner, our captains take the team to the chapel, to talk about the significance of the game. That’s players only, but from what I understand, it gets pretty emotional.”

Once at the Towson Center, the pre-game cheers, singing of alma maters and sentiment can be a distraction.

“We give our pre-game talk at Mercy, before we drive over to Towson,” Marion said “Once we get to the Towson Center, it’s hard to get their attention.”