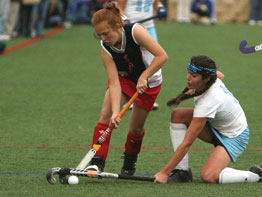 The Institute of Notre Dame, Baltimore, faced its toughest challenge of the season as the sun began to set on the IAAM C Conference field hockey championship game held on Nov. 4 at The Bryn Mawr School.

The Indians were playing the second of two finals games with a mid-afternoon kick-off.
The Indians faced off against Baltimore Lutheran, both teams 15-1 coming into the championship game, and played to a 1-1 tie in regulation, on an Indian goal from Alyssa Dondero.

After two, fast-paced overtime periods, the score was unchanged causing the teams to go into a one-on-one shootout.

Teams were allowed five tries on goal; a one-on-one match-up with the opponent’s goalie. The team with the greatest number of goals at the end of the round would be crowned as the champion.

With a chill in the air and leaves falling along the playing field, the Indians and the Saints sent their five best offensive threats to the 25-yard line.

First up was IND’s Dondero who came right at the goalie, veered right and powered the ball into the back of the cage. The Saints responded as Indian goalie Ali Saba stepped out to attack, but the Saints scored. Saba, after playing a fantastic game in regulation stopped the next two Saints tries, while the Indians kept finding the goal to extend their lead to 3-1 on subsequent scores from Michele Chmielewski and Ariella Hopp. The Saints scored one other time but not enough to get past the early Indian goals.

In other field hockey action, Archbishop Spalding High School, Severn, faced off against Garrison Forest in the A Conference finals but lost 2-0, and The John Carroll School, Bel Air, faced McDonogh in the IAAM B Conference and was defeated 1-0 in double overtime.