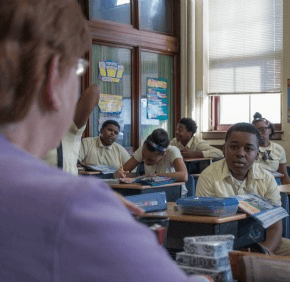 By Erik Zygmont
ezygmont@CatholicReview.org
Released the first Sunday of 2015, the police report of a murder-suicide of an unidentified man and child troubled students and staff of Ss. James and John Catholic School in East Baltimore.
The news went from bad to worse that Monday. The child was sixth- grader Matthew Thomas, a kind-hearted, intelligent and well-loved student, and the man was his father, who had been involved with the school community.
“We didn’t even find out until the day we returned,” said LaUanah King-Cassell, Ss. James and John principal.
She had received a morning email from a teacher noting Matthew’s absence. Then came calls from the mayor’s office and representatives of Matthew’s family confirming the principal’s worst fear. Tiffani Kenney, Matthew’s homeroom teacher, characterized the general reaction as shock followed by emptiness.
“It was an absolute loss,” she said. “There was nothing positive about it.”
Ss. James and John welcomed help from the Archdiocese of Baltimore’s crisis team, which had been recently upgraded under Denise Garman, director of student support services.
Nothing about that day would be easy, but “when you don’t have a plan, it’s harder,” Garman said.
Members of the crisis team, including Garman herself and Siobhan Powers, counselor at Immaculate Heart of Mary School in Baynesville, went into all classrooms, Garman remembered.
“Ss. James and John is a wonderful, close-knit and caring family,” she said. “I could feel that when I walked in there. It was a very small school, but because of the severity of what had happened, there was a lot to consider.”
Informing parents, attending to students and answering media queries were a few of the to-dos.
“I can’t even begin to imagine getting through that day without that support,” said King-Cassell, a school administrator for three decades.
As parents arrived at the end of the day to pick up their children, they were met by Garman and Powers on the sidewalk.
“The fact that the parents could see them, I felt, was important,” said Camille Brown, associate superintendent of school leadership and community programs for the archdiocesan Department of Catholic Schools.
A crisis team had been in place before Garman came on board, but under her training was updated and the network – about 20 guidance counselors and volunteers from various schools who respond to crises on a regional basis – was solidified, Brown said.
Michele Vasold, Matthew’s religion teacher at Ss. James and John, noted that the crisis team remained on-site for a couple of days, talking individually to each sixth-grader and “more intensely” with Matthew’s closer friends.
“A couple of them were like, ‘Why Matthew?’ ” Vasold remembered. “He was quiet; he was friendly to everybody. … He literally didn’t have any enemies.”
King-Cassell was grateful for not only Garman’s team but the churches that offered their buildings for Matthew’s funeral and the priests who prayed with the school, including Father Richard Lawrence, pastor of St. Vincent de Paul Parish in Baltimore and chairman of the school’s board.
Matthew continues to be missed. Six months after his death, he was honored posthumously at the school’s end-of-year awards ceremony.
“He would have been inducted into our honor society,” King-Cassell said.