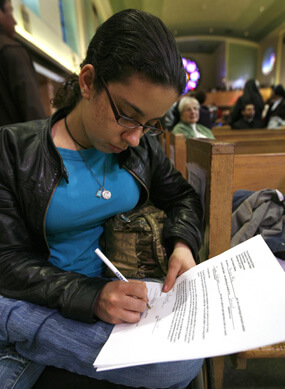 WASHINGTON – A pair of reports released in March lay out some of the data behind efforts seeking changes in immigration policies, long before Congress gets around to considering another comprehensive immigration bill.

Their timing comes as religious leaders and advocates for immigrants in Congress and elsewhere are lobbying the Obama administration to end workplace raids and make changes in policies for deciding who is locked up and who is allowed to wait at home while their immigration cases are adjudicated.

Almost a year ago, St. Bridget’s Catholic Church in Postville, Iowa, became a temporary home or at least a soup kitchen for hundreds of children, most of them U.S. citizens, whose parents had been arrested in an immigration raid at the town’s Agriprocessors meatpacking plant.

There, as in other communities hit by immigration crackdowns, families with one member facing deportation struggled with the decision to leave their U.S. citizen children behind in the only country they have ever known to be cared for by one parent or extended family.

The alternative chosen by some was to keep the family together and bring spouses and children born and raised in the U.S. to live in Guatemala, Mexico or El Salvador, where everything would be unfamiliar and life more difficult.

In one report on aspects of the country’s immigration muddle, the Urban Institute and a Minnesota-based law firm related dozens of stories of what are known as “mixed status” families, with one or more members subject to deportation, while others have legal residency or U.S. citizenship.

“Severing a Lifeline: The Neglect of Citizen Children in America’s Immigration Enforcement” described the chaos that some families encountered after a wage earner was arrested during large immigration raids in the last few years in Iowa, Minnesota, Mississippi and Massachusetts.

It told of a second-grader in Worthington, Minn., who returned from school to find his 2-year-old brother alone. The boys’ parents had been arrested in an immigration raid at a Swift & Co. plant and were unable to make provisions for someone to care for the children. The boy took care of his brother alone for a week until their grandmother was able to take over caring for the two children, both U.S. citizens.

The report said that when “Miguel” returned to school his teacher told investigators from the Dorsey & Whitney law firm, which represents many immigrants, that the previously happy child had become “‘absolutely catatonic.’ His attendance became spotty at best. His grades plummeted. At the end of the school year Miguel was not able to advance to the third grade with the rest of his class.”

The Pew Hispanic Center estimates the population of about 12 million undocumented immigrants in the U.S. includes the parents of about 3.1 million U.S. citizen children. The Urban Institute estimates that for every two adults arrested for suspected immigration violations, one U.S.-born child is affected.

“Severing a Lifeline” also described home raids in Connecticut, Maryland, Minnesota and New York where sometimes dozens of heavily armed immigration agents identified themselves as “police” and swooped into homes. In the typically early-morning incidents cited, officers questioned, handcuffed and detained whoever happened to be in the home, including minors, even when the individual for whom they had a warrant was not present.

The report recommended immediate changes to policies such as the standards used to determine the best interests of citizen children with a parent facing deportation and how home raids are conducted when children are present.

Meanwhile, a report by Amnesty International USA, “Jailed Without Justice: Immigration Detention in the USA,” looks at immigration detention practices. It notes that the number of immigrants in detention tripled from 10,000 in 1996 to more than 30,000 in 2008.

At a cost of about $95 per person per day, the majority are held in state and county jails operating under contract to the U.S. government. Their length of detention can range from a few days to years, and 84 percent of immigration detainees are unable to arrange for an attorney to represent them, noted the report.

Because immigration law violations are civil offenses, people facing immigration charges are not entitled to legal representation regardless of ability to pay, as they would be in criminal courts.

Amnesty’s recommendations included legislative remedies as well as policy changes, such as ensuring that affordable alternatives to detention are always considered, particularly for families with children.

Amnesty also urged the U.S. government to adopt human rights standards for all jails and detention centers being used for immigration detainees.

Family situations like those detailed in the reports are the focus of a series of interfaith prayer services being held around the country this spring, co-sponsored by local religious leaders and promoted by Rep. Luis Gutierrez, D-Ill.

At such a service March 21, Chicago Cardinal Francis E. George called on President Barack Obama to stop raids and deportations that break up families.